Question 1.
How did the rigid caste system in the Later Vedic period affect the shudras?
Answer:
Shudras were increasingly isolated and persecuted. They were denied the right to study the religious scriptures and were not even allowed to recite the Sanskrit hymns.

Question 4.
In which parts of India is Jainism still popular?
Answer:
Jainism is still popular in Rajasthan, Gujarat, Karnataka and Tamil Nadu.

Question 5.
Where did Gautama Buddha achieve enlightenment?
Answer:
Gautama Buddha wandered place to place in search of truth. One day he sat down under a pepal tree in Bodh Gaya and began to meditate. On the 49th day, true light dawned on him and he became enlightened one.

Question 6.
Why is Buddhism referred to as the ‘Middle Path’?
Answer:
Buddha’s religious philosophy is called Buddhism. It is called the middle path because it avoids the extreme harshness and austerity of Jainism, as well as the extremes of ritualistic Hinduism. The main principles of Buddhism are contained in the four noble truths and the eightfold path or ashtangika marga.

Question 1.
By the end of the Epic Age, many evil practices had crept into society in the name of religion. Explain.
Answer:
In later Vedic period, religion became complex and difficult. Many evil customs crept into society in the name of religion. Costly sacrifices, superstitions, and elaborate and meaningless rituals destroyed the simplicity and appeal of the original religion. The Vedic texts were written in Sanskrit, which the common people could not understand. The brahmanas explained the texts in a manner that increased their own power, wealth and status. The rites and rituals introduced by them led to the exploitation of the common people. Religion became expensive and oppressive. The caste system became rigid. The lower casts, especially the shudras, were increasingly isolated and persecuted. They were denied the right to study the religious scriptures and were not even allowed to recite Sanskrit hymns.

Answer:
Ahimsa:
Ahimsa or non-violence is the first great teaching of Mahavira. He preached that no one should harm any living creature, not even insects and plants.

Karma and Rebirth:
A person’s soul is reborn again and again because of his/her karma (actions). Hie highest goal of the person’s life was to attain moksha, i. e., freedom from the cycle of birth and rebirth. Moksha could be achieved by following the triratna (three jewels) of Jainism.
The three jewels are:

Question 8.
What were the reasons for the decline of Buddhism in India?
Answer:
Buddhism gradually declined in India for the following reasons.

G Picture study.
This is an artwork showing a religious reformer who was born in Lumbini in the 6th century bce. 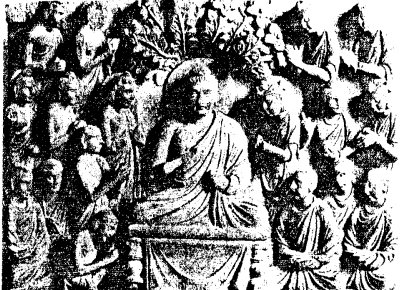 1. Identify the religious reformer.
Ans. This is a Picture of Gautama Buddha.

2.Name the religion he founded.
Ans. He found Buddhism religion.

3. Why did his teachings appeal to the people?
Ans. Buddha preached in ‘Pali’, which was easily understood by the common people. His teaching appealed to the people because of simplicity and the principle of equality.

Question 2.
When and where was Mahavira Jain born?
Answer:
Mahavira was born  in 599 bce near Vaishali.

Question 7.
Name the wife and son of Gautam Buddha?
Answer:
The wife’s name was Yashodhara and the son’s name was Rahul.