Speech On The Pen Is Mightier Than The Sword: The pen is mightier than the sword is a famous proverb that describes the power of pen, writing, ideas, and knowledge. In literal terms it means what can be done by a pen cannot be done by the word. It is very true, the writing, article, book, or even just a quote can bring on big chances which even a sharp lethal sword cannot bring.

The great writings, poetry, and preaching of the writers, philosophers, authors, and poets have a long-lasting effect on the readers. Their words remain with us and in our hearts for long. A ruler rules the people with power and army but a writer rules the people by his thoughts and ideas.

Hello! Good morning to every last one of you present over here.

Before going ahead I would like to extend a warm welcome to every person present over here. Also, I want to thank all for giving me this golden opportunity to share my thoughts on this beautiful proverb,” The pen is mightier than the sword.”

Throughout history, we have looked at various struggles, wars, fights, and heard their success stories. Have you ever thought about what was common apart from strength? It was the writings. When the masses were busy fighting the enemies, there was a small group who wrote and spread the word making people aware. Take the Indian freedom struggle for instance. When famous freedom fighters were on tip-toes fighting the enemies, poets like Subramania Bharathi started writing in a newspaper named SwedesAmitran to inspire the Indians and encourage them to take part in the freedom struggle.

That was just one example. The history and even the present are flooded with many such examples. The power of the sword results in destruction and loss of life, whereas the power of the pen creates awareness and motivates the readers. The sword can conquer only through fear but with the pen, you can conquer the hearts. The achievement by the sword is short-lived, non-willful, and illegal at many points but winning by the pen is winning heart, and so you cannot term it as illegal or non-willful in any way.

Still many will argue that in the time of bombs, missiles, and such powerful weapons, where will this small pen stand? So, for all those, when we are here talking about pen we are referring to a metaphorical perception. The pen is the symbol of intellect and wittiness. It demonstrates a world full of ideas that can change anything around. The truth is, the use of knowledge is much dependent on the one who is using it. With positive use, the knowledge acts as manna but it can convert to poison if someone uses it destruction. On the contrary, the sword is a very powerful weapon based on who holds it.

Many will argue against the notion. And that is fine. Indeed, many situations cannot be solved by just a pen. Many situations do need weapons but that doesn’t imply that you cannot solve anything by just writing and my wits. And we can’t deny the fact that the declarations, laws, and resolutions have no value until they are applied with force. So, even when you draft something so powerful with a pen, you still need a sword to help you, to make it reach people, in some instances.

Arguments are plenty and the decision is not concrete. But the truth is you cannot generalize statements and views. To conclude, I would just like to say, no matter how you use a sword, the bloodshed is for sure and the losses will be countless. But with the power of mind and knowledge, when the words are penned down, you can reach hearts and even souls and can get saved from bloodshed.

In the end, it is right to say that the pen is much more important than the sword and writing is just priceless.

Much thank you to all of you. Have a great evening! 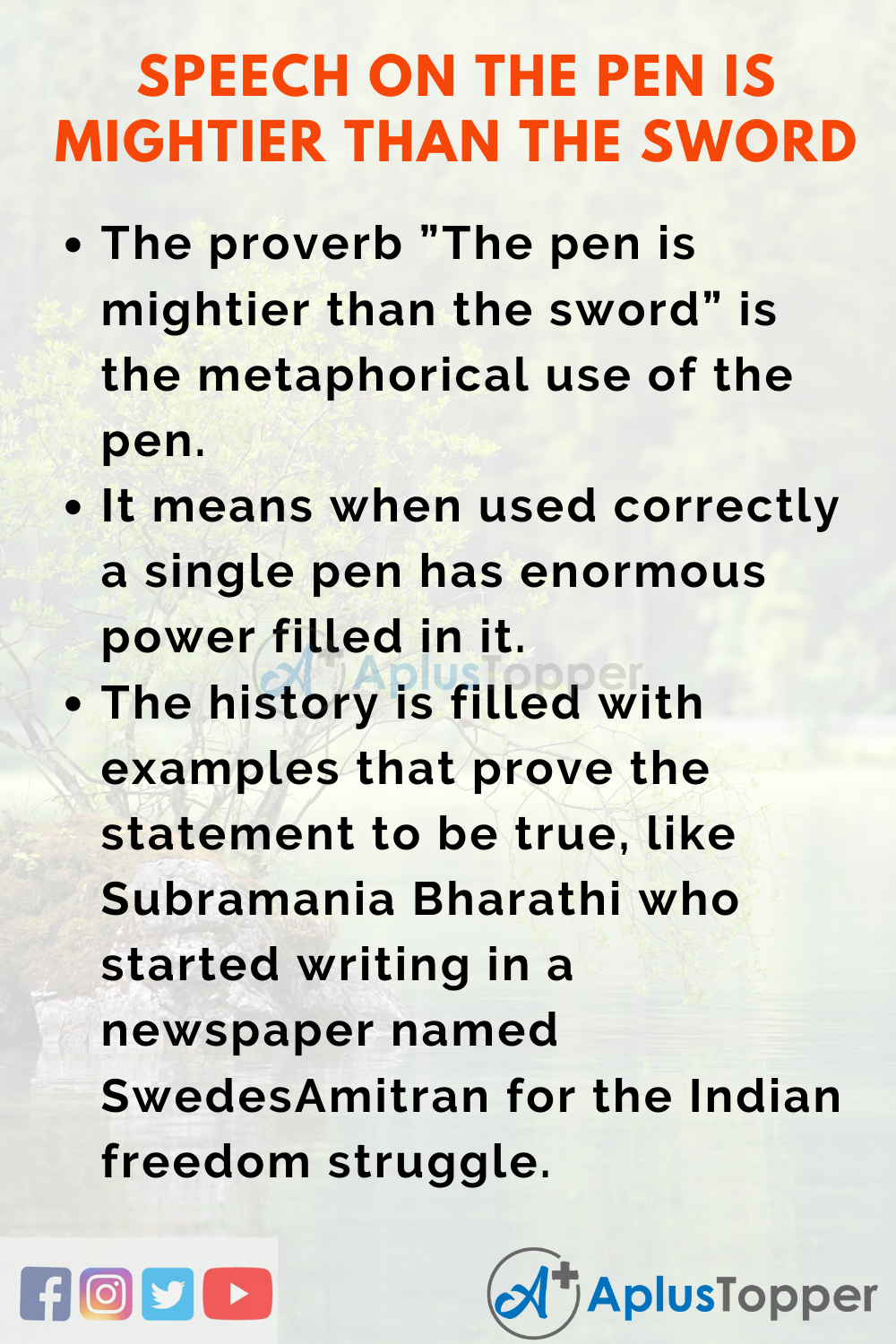 My best regards to everyone present. To start with I would welcome you all and also thank you for giving me this marvelous opportunity. The pen is mightier than the sword. Sounds funny, isn’t it? But wait, it is true. What you can do with a pen, you can’t imagine it doing with a sword.

The pen might look small and petite but has immense power filled in. The scholars, writers, poets, and academicians, can write their thoughts and reach and touch hundreds of hearts and souls. In a war, the sword win by bloodshed and loss, but a pen can win with love and willingness. History is filled with examples to show the importance of pen but still, people argue about it. And it is obvious. Many things still need the use of a sword, but with increased knowledge, the use of a pen is preferred.

To conclude, I would like to say that no matter how small a pen is, the impact is way bigger. Even after so many arguments and debates, the power of the pen cannot be overlooked. And when we are looking forward to bringing on change, then there is no way better than using a pen.

In the end, I would like to thank you all from the deep heart to give me this opportunity. Have a wonderful evening. 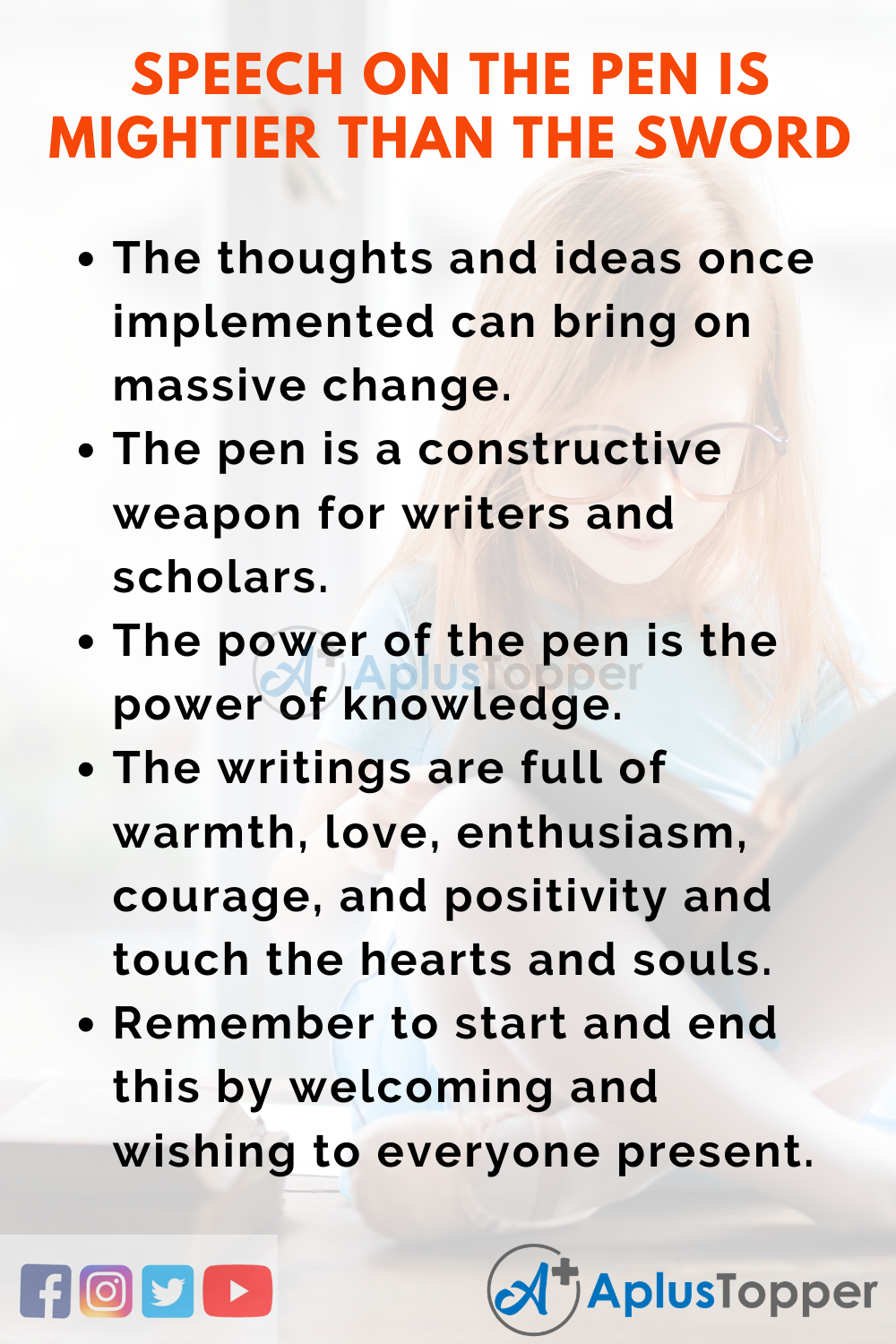 Question 1.
What do you mean by,” The pen is mightier than the sword”?

Answer:
It means the pen has more power and strength when compared to a sword. It means writing is stronger than war and hatred.

Question 2.
How can a pen overtake the strength of a sword?

Answer:
The pen and writing have the power to touch the heart and soul of the reader whereas the sword is usually linked to bloodshed. So, when you can achieve something with non-violence it is better.

Question 3.
Explain “The pen is mightier than the sword” in terms of king and writer?

Answer:
It means the king can rule only his kingdom based on his power and army but the writer can rule the world without any boundaries based on these words and writings.

Question 4,
What does the power of pen mean?

Answer:
The power of pen refers to the power of the thoughts, ideas, knowledge, and wittiness.