Schizophrenia Essay: Schizophrenia is a mental disorder which occurs in early adulthood, and it mostly impacts on emotions, thinking and speech in an individual’s life.

It is a lifelong condition, but treatment can help control the symptoms. A person may appear anxious and may lack focus before experiencing the actual symptoms of schizophrenia.

We are providing students with essay samples on a long essay of 500 words and a short essay of 150 words on the topic Schizophrenia for reference.

Schizophrenia is a long-term brain disorder. Some of the symptoms include disorganized speech, delusions, lack of motivation, trouble with thinking and hallucinations. But there are many treatments available for the reduction of the symptoms and the chances of recurrence can also be minimized.

One of the most dreaded mental illness, schizophrenia, has plagued humanity for countless years without decline. Schizophrenia reached its importance as a discrete clinical unit under the header of dementia precog in 1860. Between 1936 and 1956 approximately 7000 papers on the subject were published. More researchers in the last 100 years have spent more money, time and energy and wrote about schizophrenia probably more than all of the other psychiatric problems combined.

People’s ignorance is still abysmal regarding its course, definition, causes, outcomes and treatments. There is no permanent cure for schizophrenia, but the researches are leading to safe and innovative treatments. By studying genetics, using advanced imaging to look at the brain’s function and structure and conducting behavioural research, experts are unravelling the causes of the disease.

Researches have shown that schizophrenia may have an earlier onset in male, although it affects men and women fairly equally. Due to the high rates of co-occurring medical conditions, such as diabetes and heart disease, people with schizophrenia are more likely to die younger than the general population.

Episodes in which a person is unable to distinguish between reality and fantasy takes place when the disease is active. The duration, frequency and severity of symptoms may vary as with any other disease. Once an individual starts to grow older, the incidence of severe psychotic symptoms often decreases.

The use of alcohol or illicit drugs, stressful situations, and not taking medications as prescribed tends to increase symptoms of schizophrenia. The three major categories of this disease are i. Positive symptoms which include hallucinations like seeing or hearing things which do not exists, distorted perceptions, behaviours and beliefs. ii. Negative symptoms which include decrease or loss in the ability to speak, initiate plans or express emotions. iii. Disorganized symptoms which include disordered or confused speech and thinking, abnormal movements or trouble with logical thinking.

Optimism is significant, and patients, their family members and mental health professionals need to be aware that many patients have an encouraging course of the illness that challenges can often be spoken about, and patients have to find many personal strengths that must be supported and recognized. Schizophrenia is a mental illness which has plagued humankind since the early centuries. The mention of manic rage and paranoia in the Bible and many other religious proves that schizophrenia existed in those times too. The commonality of this disease boggles the research and healthcare communities. Even in the elder community, the disorder is common but complex.

Schizophrenia is considered as a chronic, disabling and severe brain disease, which causes withdrawal from social interactions, gross distortions of reality and disorganizations of thoughts and perceptions. The disease has unbiased and distinct symptoms.

One in twenty-five people is diagnosed with a form of mental disease in their lifetime. The psychological and medical community should be sensitive and consistent in teaching the world what a mental illness is and how people suffers from those diseases with the statistics rising day by day.

The knowledge, compassion and understanding and the urge from those that dedicate their lives to study about the disease a person suffering can easily get better and live a normal life.

10 Lines on Schizophrenia in English 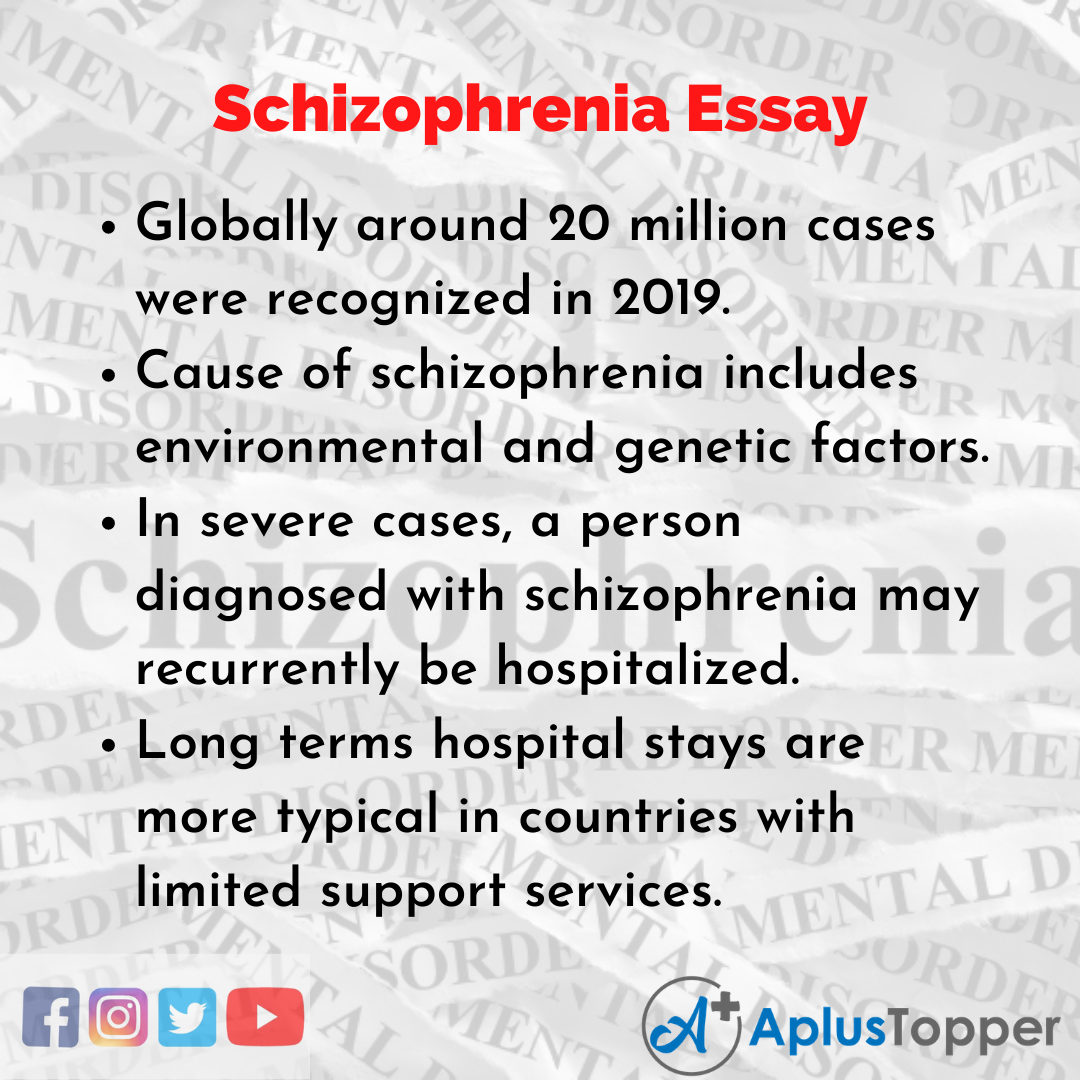 Question 1.
Why is schizophrenia vital?

Answer:
The lifespan of people affected by schizophrenia shortens by at least twenty years, and the true cause is unknown, which makes it very vital.

Answer:
Aggressive behaviour among people with schizophrenia can be triggered due to substance abuse, insufficient social support and failure in treating the patients adequately.

Question 3.
To which age group does schizophrenia strike most?

Answer:
Most commonly, schizophrenia strikes in late teens and early twenties as it is a time when a person goes through many emotional and psychological changes.