Question 2.
The GDP deflator is equal to
i) Real GDP-Nominal GDP

Question 4.
Which among the following in a flow concept?
(a) export
(b) wealth
(c) capital
(d) foreign exchange reserve
Answer:
(a) export

Question 4.
Some variables are given below. Classify them into Stock and Flow

Question 2.
State whether the following are included or excluded in the national income.

Question 7.
Assume that there are three goods produced in an economy and they are sold at different prices in dif-ferent years. Calculate GDP Deflator.

Question 4.
The phase of circular flow of income in a two sector economy is given below.

This is saving. The injection are the savings that the households, firms and the government take from the financial institutions as borrowings.

Question 6.
1. Estimate the NI of India and Pakistan from the data given below.

2. Which method is used here?
3. What are the other methods of measuring national income?
Answer:

1. The goods purchased by consumers do not represent all the goods which are produced in a country. GDP deflator takes into account all such goods and services.

3. The weights are constant in CPI – but they differ according to production level of each good in GDP deflator.

Question 8.
Write down some of the limitations of using GDP as an index of welfare of a country.
Answer:
GDP is the sum total of value of goods and services created within the geographical boundary of a country in a particular year. It gets distributed among the people as incomes. So we may be tempted to treat higher level of GDP of a country as an index of greater well-being of the people of that country. But there are at least three reasons why this may not be correct. They are discussed below.

1. Distribution of GDP – how uniform is it:
If the GDP of the country is rising, the welfare may not rise as a consequence. This is because the rise in GDP may be concentrated in the hands of very few individuals or firms. For the rest, the income may, in fact, have fallen.

In such a case the welfare of the entire country cannot be said to have increased. If we relate welfare improvement in the country to the percentage of people who are better off, then surely GDP is not a good index.

2. Non-monetary exchanges:
Many activities in an economy are not evaluated in monetary terms. For example, the domestic services women perform at home are not paid for. The exchanges which take place in the informal sector without the help of money are called barter exchanges.

This is a case of underestimation of GDP. Hence GDP calculated in the standard manner may not give us a clear indication of the productive activity and well-being of a country.

3. Externalities:
Externalities refer to the benefits (or harms) a firm or an individual causes to another for which they are not paid (or penalized). Externalities do not have any market in which they can be bought and sold. Therefore, if we take GDP as a measure of welfare of the economy we shall be overestimating the actual welfare.

This was an example of negative externality. There can be cases of positive externalities as well. In such cases, GDP will underestimate the actual welfare of the economy.

Question 10.
Relate and complete the identities/equations in column A with column B.

Question 11.
Estimate the Gross National Product at market price and GNP at factor cost through the expenditure method.

Question 13.
Fill in the blanks

Question 14.
Write down the 3 identities of calculating the GDP of a country by the 3 methods. Also briefly explain why each of those should give us the same value of GDP.
Answer:
Gross National Product (GNP) equals Gross National Income equals Gross National Expenditure, i.e.
GNP = GNI = GNE
These are equal because national income is a circular flow of income. Aggregate expenditure is equal to aggregate output which in turn, is equal to aggregate income. However each method has some different items, yet they show exactly identical results.

Their identity can be shown in the following manner:
Reconciling Three Methods of Measuring Gross 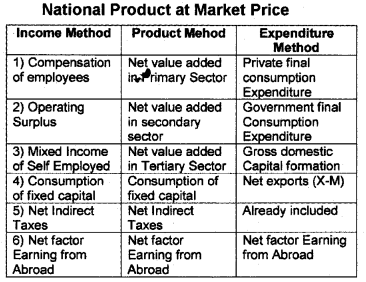 Question 15.
The economic recession of 2008 affected the market economics in general and the US in particular. Thou-sands of Indians working abroad lost their job especially in IT and banking sectors and they returned to India. Evaluate its consequences on Indian economy with regard to the following macro variables.

Question 1.
Given below some macroeconomic indicators. Derive the equations of the following terms:

7. National Disposable Income = Net National Product at market prices + other current transfers from the rest of the world

National income is the aggregate money value of all goods and services produced in a country during an accounting year. In this seminar paper, I would like to present various methods of measuring national income.

Content:
National income can be measured in different ways. Generally, there are three methods for measuring national income. They are

1. Value-added method:
The term that is used to denote the net contribution made by a firm is called its value-added. We have seen that the raw materials that a firm buys from another firm which are completely used up in the process of production are called ‘intermediate goods’.

Therefore wages, interest, profits, and rents paid out by the firm must add up to the value-added of the firm. Value-added is a flow variable.

2. Expenditure Method:
An alternative way to calculate the GDP is by looking at the demand side of the products. This method is referred to as the expenditure method. The aggregate value of the output in the economy by expenditure method will be calculated.

3. Income Method:
As we mentioned in the beginning, the sum of final expenditures in the economy must be equal to the incomes received by all the factors of production taken together (final expenditure is the spending on final goods, it does not include spending on intermediate goods).

This follows from the simple idea that the revenues earned by all the firms put together must be distributed among the factors of production as salaries, wages, profits, interest earnings, and rents.
That is GDP = W + P + In + R

In such an economy, there would be two types of markets.
They are:

The relationship between the sectors of an economy can be explained with the help of a diagram. 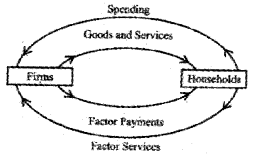