(A) Newton’s First Law of Motion

A body can not change its state of motion by itself. If the object is at rest it will remain at rest and if it is in uniform motion, it continues to be in motion unless some external force is applied on it.

Inertia:
There is an inherent property of an object by virtue of which it cannot change its state of motion or rest by itself. This property is called ‘inertia’.
Inertia is of two types– inertia of rest and inertia of motion.

(a) Inertia of rest: If the body is at rest, it will continue to be at rest unless some external force is applied on it. Examples are following.
Examples:
1. When a train at rest starts moving suddenly, a passenger standing inside the compartment tends to fall backward.
2. When a carpet is beaten up with a stick, the dust particles are detached.
3. When a bullet is fired into a glass pane, it pierces a hole only at the pt where the bullet hits the glass without breaking the entire glass pane into pieces.

(b) Inertia of motion: When a body is in uniform motion, it will continue to remain in its uniform motion, i.e. it resists any change in its state of motion due to inertia of motion.
Examples:
1. when a person jumps out of a moving bus, he should run in the direction in which bus is moving otherwise he will fall down.
2. A train moving with a uniform speed and if a ball is thrown upwards inside the train by a passenger, then the ball comes back to his hand.

Situations involving inertia
The inertia of an object is the tendency of the object to remain at rest or, if moving, to continue its uniform motion in a straight line.

Relationship between Inertia and Mass:
Larger the mass of the body, larger is the inertia.
Example: It is more difficult to stop a cricket ball than a tennis ball.

Aim: To investigate the relationship between inertia and mass.
Problem: What is the relationship between inertia and mass?
Hypothesis: The inertia of a body increases when its mass increases.
Variables:
(a) Manipulated variable: Mass
(b) Responding variable: Inertia
(c) Fixed variable: Type of hacksaw blade (The same blade is used throughout the experiment)
Operational Definition: Period of oscillation is an indicator for inertia, the responding variable. The bigger the period of oscillation, the bigger is the inertia.
Material: Plasticine
Apparatus: Hacksaw blade, G-clamp, stopwatch
Method: 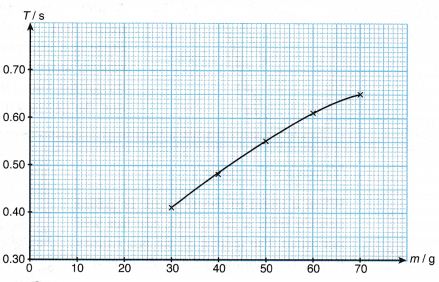 (B) Newton’s Second Law of Motion 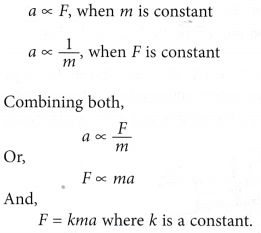 By defining 1 newton (N) as the unit force that causes an object with a mass of 1 kg to accelerate 1 m s-2 and substituting into the equation,
1 = k (1) (1)
Therefore, k = 1
With this,
F = ma
Newton’s Second Law of Motion describes the relationship between the acceleration of an object and the force applied to it.
Newton’s second law states “the rate of change of momentum of a body is directly proportional to force and takes place in the direction of force.”
i.e., when a net external force acts on an object, the acceleration of the object is directly proportional to the net force and has a magnitude that is inversely proportional to its mass.

Example 1. A worker pulls a block of ice on a smooth surface with a force, F. The ice has a mass of 80 kg. 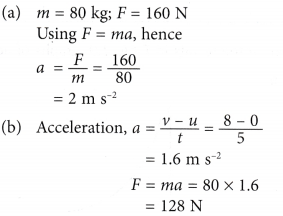 Example 2. A hawker pushes a tank of water with a horizontal force of 45 N. The total weight of the trolley and water tank is equal to 900 N.

Newton’s first law of motion gives a qualitative idea of force, while the second law provides us an idea to measure the force.

Which pair of forces for F1, and F2 causes the wooden block to move with an acceleration?

Answer: C
Acceleration occurs when there is an unbalanced force, where the net force is not zero.

Example 2. The diagram shows a car with a mass of 850 kg moving with an acceleration of 2 m s-2. There is a frictional force of 700 N acting on the car.