Time To Learn
I. Fill in the blanks:

II. Match Column A with Column B 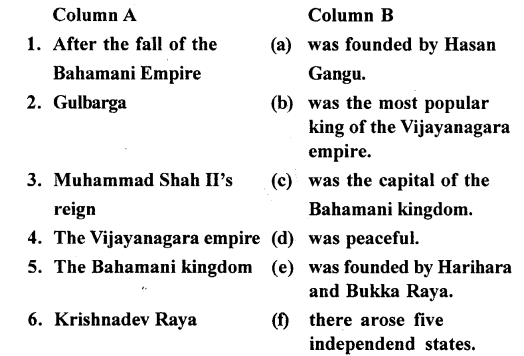 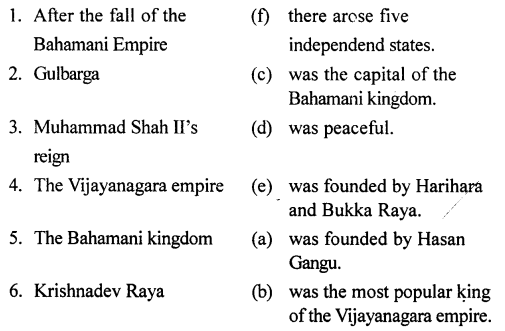 III. State whether the following statements are True or False:

Question 2.
Why did the Bahamani kingdom break up and what was the result?
Answer:
There were many reasons which led to the break up of the Bahamani kingdom. Religious intolerance, constant wars with neighbours, the pleasure seeking style of the rulers and mutual quarrels between Deccani and the Irani groups were the main causes. Moreover the later Bahamani rulers were weak and incompetent. After the death of Gawan, the Bahamani kingdom crumbled as there were no competent ministers. As a result Bahamani kingdom broke into five independent states of Bijapur, Golkunda, Ahmednagar, Berar and Bidar which were later conquered by the Mughals.

Question 3.
What was the contribution of the Vijayanagara rulers in the development of art and architecture?
Answer:
The Vijaynagara rulers were great patrons of art, architecture and learning. The city was adorned with beautiful temples. The Hazara Rama and Vithalaswami temple, built by Krishnadev Raya at Hampi, are most remarkable temples.Both the temples are exquisite. Their mandapas, gopurams and towers over the sanctum are beautifully sculptured. They also built The Elephants’ Stable at Vijayanagara.

Question 2.
Vijayanagara needed to keep a large army.
Answer:
Because of the conflicts between the Bahamani and Vijayanagara kingdom’s.

Question 3.
The Krishna-Tungabhadra doab was a much sought-after area.
Answer:
Because the empire Vijayanagara was situated on Krishna- Tungabhadra doab.And this doab and the people living in the Krishna-Tungabhagra doab memorises some of the Vijayanagar empire and these oral traditions combined with archaeological finds, monuments and inscriptions and other records helped scholars to rediscover the /ijayanagara Empire.

This is a picture of a temple at a capital city: 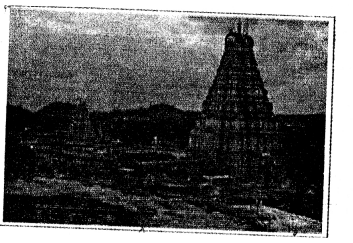 2. Name the empire and the capital city where it was built.
Ans. Vijayanagara empire and Hampi was capital.

A. Fill in the blanks:

D. State whether the following are true or false:

1. How did the collapse of the Sultanate impact North India?
Ans. North India was rocked by political turmoil and instability.

2. What was Krishnadeva Raya’s contribution to literature and art?
Ans. Krishnadeva Raya was a great patron of art and literature. He was himself a Sanskrit scholar and a good Telegu poet. He maintained a magnificent court and encouraged poets and learned men.

3. What is the significance of the Battle of Talikota?
Ans. In the battle of Talikota the five kingdoms of Bijapur, Ahmadanagar, Berar, Golconda and Bidar formed an alliance against Vijayanagar kingdom and gave it a crushing defeat. Due to this battle the Hindu empire in the South was totally finished.

9.What was the extent of the Bahmani kingdom?
Ans. Bahmani kingdom stretched from the Arabian Sea to the Bay of Bengal and it also included the whole of northern Deccan with the river Krishna as its southern boundary.

Question 4.
Describe (a) the importance of trade in Vijayanagar and (b) the position of women in society.
Answer:
(a)
Krishnadeva Raja encouraged foreign trade with the Portuguese who had established trade centres on the Malabar Coast. He earned a rich revenue by imposing custom duties and other taxes on them. He took active steps to promote agriculture. Irrigation facilities were developed by building dams and canals.
(b)
Women in general were respected, but they did not – enjoy much freedom. Child marriage and sati were common practices. Some upper-class women, however, occupied high positions in society and participated in social, literary and even political life.

Question 5.
Briefly discuss the conflict between the Vijayanagar and Bahmani kingdoms over the Raichur Doab.
Answer:
The Raichur Doab was a fertile area, that touched the southern boundary of Bahmani kingdom and northern boundary of Vijayanagar empire. This area become a battleground for both the kingdoms as each one wanted to rule over it because it was a rich source of revenue. It constantly passed on from one hand to another till finally the issue was finished after the defeat of Vijayanagar in the Battle of Talikota

Question 6.
Give an account of the achievements of Mahmud Gawan.
Answer:
As a competent and successful general Mahmud Gawan enlarged the boundaries of the kingdom and recaptured the important port of Goa from the Vijayanagar kingdom.
He was also a capable administrator. He promoted and encouraged agriculture a great deal. As a result the kingdom become economically prosperous.
Mahmud Gawan was a learned man and a patron of learning. He built a madarasa in the capital city of Bidar and donated his private collection of 3,000 books. He gave scholarships to poor and deserving students

Question 7.
What was the actual position of the Bahmani kings in the administrative set-up?
Answer:
The Bahmani king in theory were powerful but in practice authority was depended on the strength of his army. Weak Sultans were controlled by the Ulemas and powerful nobles.

This is a picture of the ruins of the capital city of a powerful kingdom in the Deccan which was founded by two brothers. 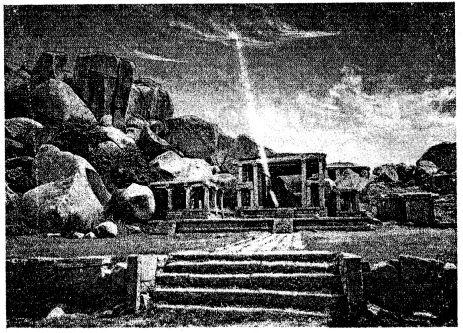 Question 2.
Who was the greatest ruler of this kingdom?
Answer:
Krishnadeva Raya.

Question 3.
Mention any five achievements of this ruler.
Answer:

Question 4.
Describe briefly the capital city of this kingdom.
Answer:
Hampi, the capital of Vijayanagar, was a splendid city. It was
surrounded by sevan walls and its total circumference was 96 kilometres (60 miles.) The streets were paved and well laid out. The city was studded with gardens, lakes, mansions and temples. Fresh sweet-scented flowers were sold in abundance. Everyone wore jewellery. Diamonds, rubies, pearls and emeralds were openly sold in crowded bazaars.

Question 5.
What is the most outstanding feature of the Gol Gumbaz?
Answer:
Gol Gumbaz has an enormous whispering dome. In this dome the whisper returns back nine times to the person who carries it out.