ICSE Solutions for Class 6 History and Civics – The Vedic Civilisation


II. Match Column A with Column B: 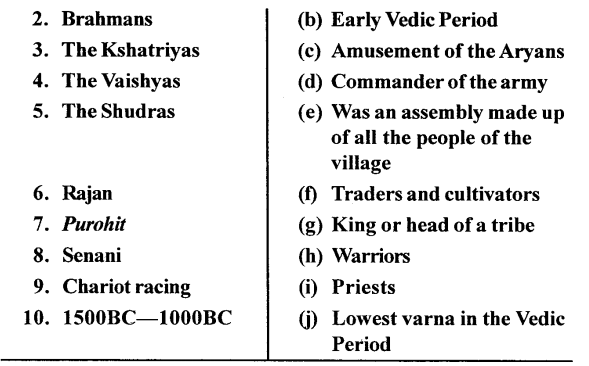 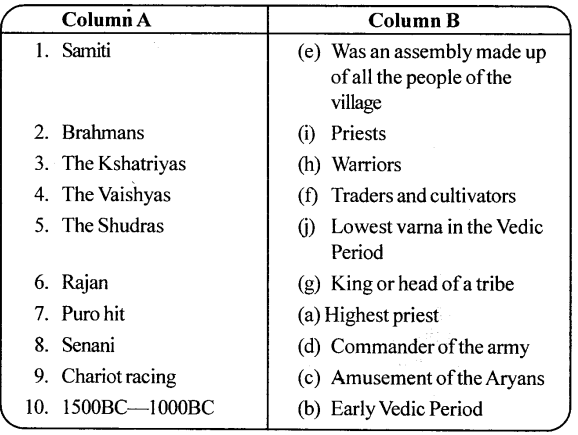 III. State whether the following statements are True or False.

Question 2.
Which gods and goddesses were worshiped by the Aryans during the Early Vedic Period? Describe the changes that took place in their religion in the Later Vedic Period.
Answer:
During the Early Vedic period, the Aryans worshipped nature and its forces like the sun, earth, sky, wind, rain and fire. Most important gods were Indra (Rain-god, god of storm and war), Varun (water-god), Agni (fireg od), Surya (Sun-god). Early Aryans performed yajnas and offered prayers and chanted hymns. During the Later Vedic period, the mode of worship became complex and complicated. The Early Vedic gods such as Indra, Agni, Varan, etc., lost their importance and were replaced by Brahma, Vishnu and Shiva. Religious rituals and yajnas and sacrifices became complicated and too elaborate.

Question 3.
On what basis was the Aryan society divided? Mention the functions of each social group.
Answer:
The ‘Varna’ system was an important feature ofthe Vedic society. There were four Vamas — Brahmanas, Kshatriyas, Vaishyas and Shudras. Brahmanns were teachers and priests. Kshatriyas were rulers and warriors. Farmers and traders formed the Vaishya group. Shudras served all the three classes, did menial jobs and consisted of artisans and labourers. Towards the end of the Later Vedic period, occupations became hereditary and people from the same occupation formed a specific vama. The vama system became very rigid and inflexible. Vama system became hereditary.

Question 4.
How did the Aryans amuse themselves?
Answer:
Chariot racing, hunting, gambling, Singing, dancing, playing musical instruments were the favorite amusements of the Aryans. They loved to play the game of dice which was very popular. Flute, dram and lute were favorite instruments.

Question 5.
Describe the political organisation of the Aryans during the ‘Later Vedic Period.
Answer:
Small tribal organisations of Early Vedic period expanded and became powerful and turned into large kingdoms. The position of Rajan (king) became stronger. He gained absolute power and his position became hereditary. Powerful kings performed elaborate and complex sacrifices such as Ashwamedh, Vajapeya and Rajasuya sacrifices. The commander-in-chief, ‘Senani,’ became very important. The ‘ Sangrihitri’ or tax collector became a very important officer. The two assemblies, Sabha and Samiti lost their importance and their powers were taken away by the king. Nevertheless, these organisations continued to exist and were dominated by the rich and influential people.

Question 6.
Compare the position of women during the Early Vedic Period and the Later Vedic Period.
Answer:
During the Early Vedic period, women were respected and given a high status in society. They even attended the assemblies and participated in debates. The wife was the husband’s partner in all social and religious ceremonies. Girls had the freedom to choose their husbands through the system of ‘ Swayamvara’. But during the Later Vedic period, society became patriarchal as most prayers contained the desire to have a son. The position of women deteriorated during the period. Women were considered inferior to men and were denied education. Their freedom was curtailed. Polygamy began to be practiced. They were supposed to serve their families and were confined to the four walls of their houses.

Question 7.
What difference do you find in the position of the King of the Early Vedic Age as compared to the King of the Later Vedic Age?
Answer:
During the Early Vedic period, the Rajan (king) was the head of the tribe. His chief occupation was fighting battles to defend and protect the tribe and its territory. His position was not hereditary and the two tribal assemblies — Sabha and Samiti — checked his power. The king was in most cases selected or chosen by the tribal heads due to his bravery and wisdom. During the Later Vedic period, the position of the king became stronger. He gained absolute power and his position became hereditary. He started claiming himself to be the representative of God. He performed several complex sacrifices (yajnas) to augment his power and prestige — Ashwamedha, Vajapeya and Rajasuya. He also assumed titles of ‘Samrat’ and ‘Mahadhiraj’

Answer:
1. The Vedas:
There are four Vedas — the Rigvada, the Samaveda, the Yajurveda and the Atharvaveda. They mainly contain hymns in praise of various gods. The Rigveda was the earliest, written around 1500 BC. Other three Vedas were written during 1000 BC — 600 BC. The Atharvaveda contains charms and spells to ward off evils. The Yajurveda also contains sacrificial formulae and rituals. The Samaveda has collection of hymns set to tunes; it is a modified collection of the Rigveda.
2. The Epics:
The Ramayana and the Mahabharata — were written during the Later Vedic period. They give a lot of information about the society and economy of the Later Vedic period. The Ramayana written by Sage Valmiki in Sanskrit tells the story of Rama. It envisages an ideal family and society. The Mahabharata written by sage Ved Vyas in Sanskrit in verses, describes the great battle between the Pandavas and the Kaurvas. The epics are the main source of information about the social, economic and political conditions prevalent in the Epic Age or during the Later Vedic period.

Picture study:
This is the picture depicting an institution of Vedic Period. 1. Identify and name it.
Ans. AGurukul

2. Describe this system/institution.
Ans.
A student (Brahmachari) of 7 years was sent to Gurukul (family of a teacher) where he lived with his Guru. Vedic literature, mathematics, medicines, astronomy, astrology, etc. were the subjects students would learn. They also leamt sword fighting, archery, wrestling etc. to be used in battlefields. Students served their guru and paid guruda kshina after the completion of their education, according to their ability.

3. Which Ashrama did it belong to ?
Ans. Brahmacharya.

Questions Based on Early Vedic Civilization
A. Fill in the blanks.

Question 2.
Describe the various stages in which the Aryans entered India.
Answer:
The Aryans entered India in main two stages and took several centuries to bring India under their control.The first settled in Sapta Sindhu. The region named Brahmavarta, which means the land of the gods. The period between 1,500 BCE and 1,000 BCE, during which they lived here, is known as the Early Vedic Period. Then Aryans moved ahead and settled in Gangetic Valley, the region named Aryavarta, the period between 1,000 BCE and 600 BCE, this period known as Later Vedic Period.

Question 3.
Name the four Vedas. How have they come down to us?
Answer:
The four vedas are followings

Question 4.
Who was a rajan? What were his duties?
Answer:
Rajan was the chief of the tribe. He was ablest and the strongest man. His duties were to protect people from enemies and looked after their welfare.

Question 8.
What were the main occupations of the Aryans?
Answer:
Agriculture and farming was their main occupations. The cow was considered very valuable and was mark of wealth. The trade was done by land and sea route. Barter system was in practice. The main industries were of goldsmiths, carpenters, blacksmiths, weavers, potters, leathers and physicians.

Question 10.
Name the gods worshiped by the Rig Vedic Aryans. How did they worship their gods?
Answer:
Aryans worshiped the different forces of nature as gods and goddesses. They worshiped Indra, Agni, Surya, Varuna, Vayu, Soma, Prithvi, Usha and Yama.The Aryans did built temples for worship. They worshipped in open air by recited prayers in praise of these gods and making offerings (grain, ghee and milk) to them. The entire family took part in yagnas and other religious ceremonies.

Question 11.
What was the position of the women in the Rig Vedic Period?
Answer:
In the Rig Vedic period the position of the women was high and respectable. They were given opportunities for education. Women could choose their husbands. There was no child marriage and widows were allowed to remarry. No religious function could be completed without her presence. Some women composed verses, which is included in Rig Veda.


D. State whether the following are true or false.

Questions Based on Early Vedic Civilization
A. Fill in blanks.

Question 2.
How did the king become more powerful during this period?
Answer:
The king became more powerful during this period because kingship became hereditary. The sabha and samiti lost much of their control over the king. Many new officials assistants like treasures, collector, chamberlain had come into prominence. The king was elevated to the position of God’s representative on earth.

Question 3.
How did the society get sharply divided during the Later Vedic Period?
Answer:
During the later vedic period society get sharply divided. Caste was decided by birth and not by occupations. The brahmans and kshatriyas formed the ruling class. The vaishyas were the artisans, traders and farmers. The shudras were the uneducated workers who served the other three classes.

Question 5.
What was the position of women during the Later Vedic Period?
Answer:
The position of women declined in Later Vedic period. She was not allowed to take part in political life. Swayamvaras were no more allowed. She was not given much respect and importance at social and religious gatherings. Women were not allowed to study Vedic literature. The birth of girl was not
welcomed.

Question 7.
What did the students do during their stay in the gurukul?
Answer:
The students led simple and highly disciplined lives in gurukul. They helped their guru in many ways like to cleaned house, drew water from the well, gathered wood and worked in the fields. Students had to memorize lessons which were tought orally.

Question 8.
What was the method of teaching in a gurukul?
Answer:
In a gurukul students had to memorize lesson, which were taught orally. After completing their education, the students paid guru dakshina according to their means.

Question 10.
Mention the important features of the religion of the Later Vedic Period.
Answer:
New ceramonies and rituals were gaining importance day by day in the religion of Later Vedic period. The mode of worship became complex. Brahma, the creator, Vishnu, the preserver and Shiva the destroyer, became the most important gods. The status of the brahmans rose up because they made rituals complicated.

Question 11.
What is the impact of the Aryan civilization on India?
Answer:
The Aryans civilization is the cradle of India culture. The Hinduism of today is based on the Philosophy of the Vedas and the Upanishads. The Vedic literature binds the vast majority of Indians into one nation.

State whether the following are true or false.