II. Match Column A with Column B 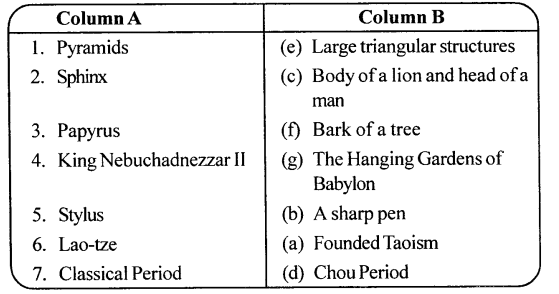 III. Write True or False against the following statements

IV. Answer the following questions in a few sentences.

1. With what name is the old kingdom of Egypt also known?
Ans. This is known as the period of the construction of pyramids.

2. Mention the contribution of ancient Egyptians.
Ans. Ancient Egyptians developed a photographic script called hieroglyphics. They built pyramids, sphinxes, and knew how to preserve mummies. They knew about basic mathematical calculations and circulation of blood. They developed the solar calendar.

4.What is Egyptian writing known as?
Ans. Hieroglyphics

Question 3.
What was the position of the king in the Egyptian society?
Answer:
The king occupied the top position in the Egyptian society. He had absolute powers over his people. People worshiped him as God and his statues were placed in temples. King’s achievements were described on their wails. The king was called the ‘ Pharaoh’.

Question 4.
What do you know about the Sphinx?
Answer:
It is a fine example of Egyptian sculpture. It is a mythological animal with the body of a lion and the head of a man. It is carved out of a single large stone. It was meant to guard the pyramids.

Question 5.
Describe the contribution of Egyptians in astronomy.
Answer:
Egyptians developed the first solar calendar. They made the first known calendar of 365 days in a year of 12 months, each month of 30 days.

Question 6.
What is a Ziggurat? Describe it and give an example.
Answer:
Mesopotamian city was divided into three main areas — the sacred area, the walled city on a mound and an outer town. The sacred area had the main temple called Ziggurat dedicated to the patron God of the city. The temple had multi-storeys each smaller than the one below it. The temple area was also the administrative centre.

Question 7.
Why is Hammurabi famous in history?
Answer:
The greatest king of Babylon was Hammurabi who became famous for first ever codification of laws, called Hammurabi’s Code of Laws. The laws were 282 in number and were carved on both sides of an eight feet stop pillar. The pillar was placed in the temple of Marduk – the Sun God. The punishments depended on the nature and circumstances of crimes and the position of the offender in society. Other ancient nations took lead from these laws.

Question 8.
Describe the contribution of the Chinese civilisation in various fields.
Answer:
The Chinese were the first to grow tea and produce silk from silkworms. They were also the first to make porcelain or Chinaware and to produce paper. They made the seismograph and recorded earthquakes. They used both solar and lunar calendars. They also invented the mariner’s compass, gun powder, the umbrella and kites. They also invented an astronomical clock. The Great Wall of China, one of the seven wonders of the ancient world, extending over 2400 km, was built by the Chinese. The pagodas made of wood are another example of fine Chinese architecture.

Question 9.
Describe the religion of the people of the Chinese civilisation.
Answer:
Like in other contemporary civilisations, the Chinese also worshiped various forces of nature. They worshiped a god called Shang Ti or the ‘ruler above’. They believed in ancestor worship, Taoism and Confucianism’ were the two most popular religions and philosophical systems founded by Lao-tze and Confucius respectively.

Question 1.
The floods of the river Nile benefited the Egyptians.
Answer:
The Nile was the only source of water without which Egypt would have been a desert. Egypt hardly receives rainfall and the region would have been barren but for the fertile alluvium, deposited by river Nile. The floods deposited rich and fertile alluvial soil in the floodplains so essential for agriculture.

Question 2.
Hwang Ho is called the ‘Sorrow of China.’
Answer:
The large river Hwang-Ho often changed its course after the floods. Floods led to destruction of crops, humans and cattle. People living near it faced many difficulties due to floods. That is why it is called the ‘ Sorrow of China’.

VIII. Picture study: This is a world famous garden. 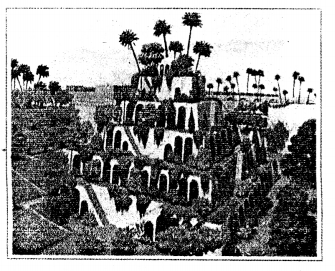 1. Where and when was it built?
Ans. The Hanging Gardens of Babylon was built in Mesopotamia.

2.Name the king who got it built.
Ans. It was built by king Nebuchadnezzar II.

3.Why did he build it?
Ans. He got it built for his wife who was the native of a green and mountainous land and she often missed the scenic beauty of her homeland. The king recreated her beautiful homeland by building the Hanging Gardens.

Questions Based On Mesopotamian Civilation
A.Fill in the blanks.

B. Match the Following

Question 6.
Name the greatest contributions of the Mesopotamians in the field of architecture.
Answer:

Question 8.
What was Hammurabi’s contribution to the legal systems of Mesopotamia and the world?
Answer:
Hummurabi’s code of law undoubtedly, One of the greatest achievements of Hummurabi the king of Babylon. This code of law, written on a stone slab. Hummurbi is the earliest complete record of laws that has been found in the world. This code is based on justice, old customs and traditions. The code deals with every part of the human life such as property, wages, debts, banking, theft, murder, marriage etc.
There are punishments for crimes injuries and other evils and rules about family life also include.

Questions Based On Egyptian Civilation

Question 1.
Why is Egypt called the ‘Gift of the Nile’?
Answer:
Nile has proved a great boon for Egypt. The river Nile makes the land quite fertile. The Egyptian farmers can grow crops on the same fields year after year. Nile also served as a highway and made navigation possible. This thing promoted trade and commerce within the country as well as with other countries of the world. Rightly Egypt has been called ‘The Gift of Nile.’

Question 4.
Name the three social classes of ancient Egypt. Mention the people who constituted each of these classes.
Answer:
The Egyptians were divided into three distinct classes. These are following

Question 5.
Briefly describe the family life of the early Egyptians.
Answer:
The families were close -knit groups. The relationship between the husband, wife and children was usually close. The father was the head of the family. Women were treated with respect and their property rights were protected. Children enjoyed carefree and happy lives. Wealthy families lived lives of luxury and pleasure.

Question 7.
What is a mummy? How was a body mummified?
Answer:
The preserved dead body is called Mummy. A dead body was embalmed with spices and wrapped in a fine linen.

Question 8.
Who were the pharaohs? Why were they treated like gods?
Answer:
The Pharaohs were kings of Egypt. Pharaohs treated like gods because Egyptian believed that Pharaoh was to be representative of God on earth.

Question 9.
Why did the ancient Egyptians preserve their dead?
Answer:
The Egyptians believed in life after death, So they preserve the body of the dead.

Question 11.
Discuss briefly the contributions of the ancient Egyptian in the following fields:

Answer:
Medicine— The Egyptian mummies, prepared thousands of years ago are still well preserved. This is proof of their advanced knowledge of medicine. Egyptian doctors and surgeons were renowned for their skills. They are also credited with having made the world’s first medical diagnosis.
Astronomy— The Egyptians were the first to make an instrument to observe the movements of stars and planets. They also invented the water clock to read the time at night.

Question 2.
Name the rivers that gave rise to the ancient Chinese civilization. Why was one of them known as the ‘sorrow of China’?
Answer:
Hwang Ho and Yangzte Kiang are two rivers that gave rise to ancient Chinese civilization. The river Hwang Ho was also known as the ‘Sorrow of China’ because it often changed its course after the floods and caused destruction of crops and canals dug for irrigation. People living on the banks of this river were especially affected

Question 6.
Describe the Great Wall of China. Why was it built?
Answer:
The Great Wall of China was built by Emperor Shi Huangdi. It is one of the most impressive of Chinese architectural accomplishments. It is about 2,400 km. long and varies in height from 4.5m to 9m. This wall forms the northern boundary of China. It was built across mountains, deserts and plains. There are 10,000 watch-towers at regular intervals along the wall. It was built to protect the China from the frequent attacks of barbarians.