ICSE Solutions for Class 6 History and Civics – History – An Introduction

II. Match Column A with Column B: 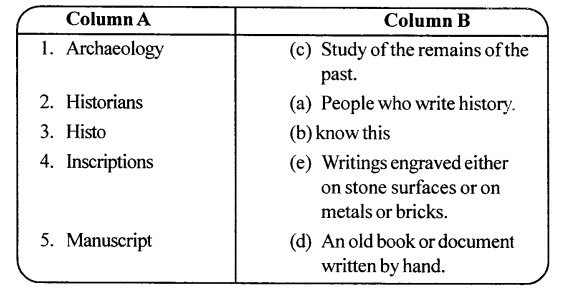 
Question 1.
What is history? What is the origin of the word‘history’?
Answer:
History is the study of our past, a record of the events that happened long ago. It tells us about the life of people during a particular period. The word ‘History’ comes from the Greek word ‘Histo’ which means ‘know this’.

Question 2.
Why do we study history? Give two reasons.
Answer:

Question 3.
Which period in history is called prehistoric?
Answer:
‘Pre-history’ means ‘before history’. This period refers to the era when man had not developed the art of writing. Hence, there are no written records of this period. The life of people during this period is constructed through tools, weapons, bones, etc.

Question 6.
What do we mean by culture?
Answer:
Culture is the sum total of knowledge, beliefs, morals, art, customs and laws and other capabilities and habits acquired by man as a member of society.

Question 7.
Explain the term archaeology.
Answer:
Archaeology means the study of the remains of the past such as inscriptions, monuments, tools, coins, potteiy, etc.

V. Given below are some drawings. Circle those which you think below to prehistory.
VI. Picture study — This picture shows a valuable source of history. 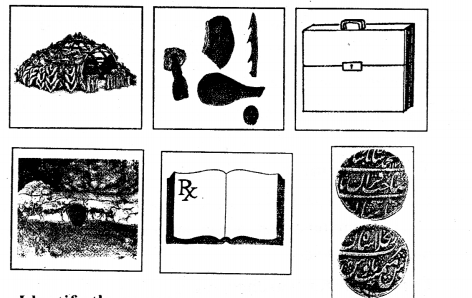 1.Identify the source
Ans. The source is coin.

2.How do you think these are useful ?
Ans. Coins give us information about use of a metal during a particular period and the economic conditions of the people.

3.What do you understand by the term ‘numismatics’ ?
Ans. Numismatics is the study of coins. 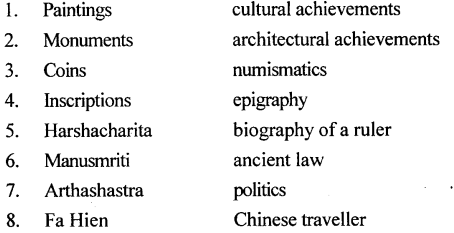 Question 1.
What is history? Why do we study history?
Answer:
History is a record of people, places and events of the past, arranged in chronological order.We study history because it tells us about the problems of our ancestors, their aspirations as well as their achievements.

Question 5.
What are monuments?
Answer:
Monuments are ancient buildings such as temples, palaces and forts, which are valuable sources of information of the life and time of people in the distant past.

Question 8.
What information do we get from inscriptions?
Answer:
The Inscriptions provide us the information about rulers, the extent of their empires, important events and also about the religious and cultural life of people in a particular period.

Question 10.
What are manuscripts? On what surfaces were they ; written?
Answer:
Manuscripts are the handwritten records of the past in the form of books. These records were written on a variety of surfaces such as dried sheep or goat skin, dried palm leaf, the bark of birch trees and much later, on paper.

Question 12.
What do you understand by secular literature? Give two examples.
Answer:
Non-religious literature is known as secular literature, it includes biographies of important historical characters. For example Harshacharita by Banabhatta, dramas and poems by famous writers Kalidasa, folk tales such as Panchatantra.

The picture below is a painting from a manuscript of the Rig Veda showing the various gods and goddesses worshiped.

3. What kind of information does this source of history reveal?
Ans. This sources of history have helped historians to reconstruct the distant past and give a fairly accurate picture of ancient India.