Essay on Ranchi: Ranchi is widely known as the capital of Jharkhand. It is considered to be one of the most beautiful cities in the eastern part of the country. This city has typically delightful weather. Ranchi has several numbers of well-known colleges and universities including IIM, NIFFT, BIT, and so on.

This city is also the home for several tremendous and famous personalities such as M.S Dhoni. It has an incredible transportation system. It is an important hub for cotton, tea, and agricultural trade. Few of the leading industries of the city are the silk production and shellac manufacturing and heavy machine tools.

We are providing students with essay samples on a long essay of 500 words and a short essay of 150 words on the topic Ranchi for reference.

Ranchi is located on the Deccan Plateau and is a beautiful and charming city. It provides a refreshing sight of tiny rock formations, hills, and several waterfalls from which the town derived its name.

This urban area is considered to be a rapidly developing industrial centre. Ranchi is known to display a combination of many different religions, communities and cultures that are visible through their festivals and cuisine.  Ranchi is popularly recognized since it has been the inspiration for numerous masterpieces of Rabindranath Tagore. The proof of this is still conserved within the Tagore Hills.

This city used to be popularly called the “forest land”. It houses many different tribes, although it mostly includes the Mundas and Santhals. It led to the formation of several types of beautiful art, cuisine, and music in this place. The most popular tourist attraction in this region is the tribal wood and bamboo works along with the Pitkar paintings. These are known to appeal to a large number of visitors.

The Ranchi district is situated in the Chota Nagpur Plateau, which was originally the home of the races like Oraon and Munda. Any outside forces did not confine this area until the city was taken over in the year 1585 by King Akbar. This area was constantly used over the years for its resources under the reign of the Mughal Empire. This particular region is said to have been of high importance during the fight for freedom. It was also the place where several movements for freedom took place.

After attaining freedom, Ranchi was considered as a part of the Bihar state. However, after the formation of Jharkhand in the year 2000, Ranchi was included in it and was also announced as its capital. Ranchi is popular for comprising of many kinds of culture which is a mixture of several tribes and their culture or traditional methods. The ancient tribals, Mughals, Hindu kings, and the Buddhists have greatly influenced the culture of the city.

The nature of the area has resulted in the people performing agricultural work in the mines. Ranchi has two types of staple foods such as wheat and rice. This city is also highly popular for its elegant arts, classical music, and dance forms including Santhal, and Chhau.

This city is also known for its splendid celebration of several festivals like the Chatth Puja, Basant Panchmi, Diwali, Holi, and so on. Moreover, the exquisite wood carvings, along with its sophisticated handiwork, has also added on to the elegance of the entire city. Wood and bamboo are taken from the forest and used by the labourers to create rice huskers, mats, wicker baskets, coasters, and so on. The other important speciality of this region includes the paintings and pottery.

The most famous kind of paint available in this city is the Paitkar or Scroll paintings. The Tribals create these. Another popular form of painting is the Sohrai Art which is created during the harvest or festival period by the women. Moreover, Ranchi is also well-recognized for providing a variety of cuisines and delicious food. It includes Kanda, DubhniRoti, Pua, Chokha, Handia, Litti and more. 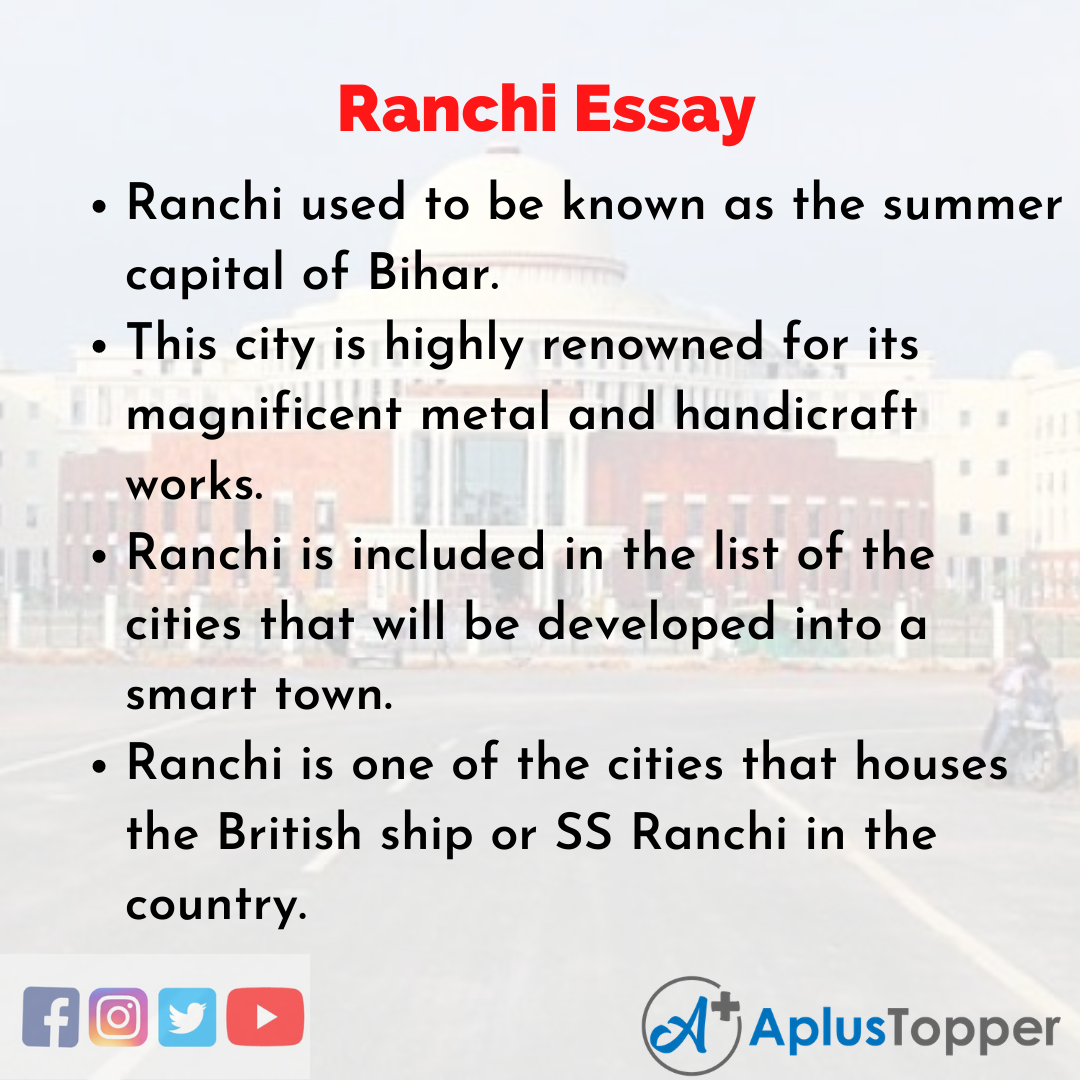 Ranchi is present under the state of Jharkhand and is the capital of the state. This city is situated at an altitude of 700 metres. In the earlier years, Ranchi used to be referred to as the summer capital of Bihar. The reason behind it was its altitude, waterfalls, surrounding elegant Subernekha river and dense forest.

The natural beauty of the city Ranchi has attracted numerous visitors throughout the entire globe. The climate of Ranchi is considered to be ideal and pleasant throughout the day.

There is a variety of wildlife and trees present in this city. Few of the rare category of trees available in this city include the Sal, Simul, and Maugham. Ranchi is also well-known for providing several types of delicious food. It includes Aloo Chokha, Pua, Litti, and much more.

10 Lines on Ranchi Essay in English

1. This city is referred to as the “land of waterfalls”.
2. The name Ranchi is formed from the word “archi”.
3. Ranchi holds the forty-sixth place in terms of the biggest towns in the country.
4. The Jagannath Temple situated in Ranchi was established back in the year 1691.
5. The Birsa Zoological Park in Ranchi is the home to a variety of wild animals and vegetation.
6. Ranchi used to be known as the summer capital of Bihar.
7. This city is highly renowned for its magnificent metal and handicraft works.
8. Ranchi is included in the list of the cities that will be developed into a smart town.
9. Ranchi is one of the cities that houses the British ship or SS Ranchi in the country.
10. The biggest engineering complex present in India is the Heavy Engineering Corporation or HEC.

Question 1.
Which month is ideal for visiting Ranchi?

Answer:
The months between September to March is ideal for travelling to Ranchi.

Question 2.
What are the types of languages used in Ranchi?

Question 3.
Which places in Ranchi are popular?

Answer:
The places that are famous in this city are Tagore hill, Kanke dam, Pahari Mandir, etc.

Question 4.
Which foods are famous in Ranchi?