Essay on Rajkot: This city is located in the Saurashtra region in the state of Gujarat. Rajkot is considered to have a high rate of the population of around 1,390,640 people. However, there are a large number of people with a different religious background that coexist peacefully in Rajkot.

The area taken up by the city is around 170 km. Besides, the distance between the capital city, i.e. Gandhinagar and Rajkot, is about 245 km. Moreover, this city also offers high-quality hospital facilities.

We are providing students with essay samples on a long essay of 500 words and a short essay of 150 words on the topic Rajkot for reference.

This city is located in the western part of India. It is primarily a commercial town. Rajkot is mostly known for its variety of foods, sweets, traditional snacks, handicrafts, festival celebrations, and its distinct culture.

The Jadeja Rajput Clan did the establishment of the city in the year 1612. It is widely popular as the town where Mahatma Gandhi completed his early education.

Some of the places that are popular in Rajkot amongst the visitors are Lang Library, Watson Museum, Jubilee Garden, Kaba Gandhi No Delo, etc. These are some of the elegant places present in the city.

Rajkot provides a range of traditional and modern shopping malls across the entire city. One of the famous malls in Rajkot includes the crystal mall. This mall offers fashionable clothes that are popular across the globe. There are several local brands provided in these malls, as well.

Moreover, there are several accessories and clothes available that represent a combination of both traditional and modern wares of Rajkot. The markets present in this city represent an impressive set of collections. These markets also keep fashionable and colourful clothes.

The most famous market in this street is the Dharmendra Road Bazaar, where one can quickly get a different variety of traditional clothes. The markets, namely Soni Bazaar and BangdiBazaar, are famous for selling jewelling across the city. The rarest demand for footwear known as the Mochi Bazaar is also including in the renowned shopping destinations.

This city is popularly known as the “Rangiloo Rajkot”. In other words, “Colorful Rajkot”. Rajkot is considered as the city of painting. Thus, it is referred to as the “Chitranagri”.

There are several mesmerizing historical destinations present in this city that attract people throughout the world. Some of the magnificent places in Rajkot are Midtown Library, Saurashtra Cricket Stadium, Rotary Dolls Museum, Connaught Hall, and so on.

Due to the location of this city nearer to Gujrat, the cuisine available in Rajkot is very similar to the complete meal of Gujrat. The central theme for a meal prepared in Gujrat is Thali. This thali is a combination of Dal, Rice, Chappati, Desserts and other items, which makes it a complete meal. It also includes a particular type of curry which is very well-known in the city of Rajkot.

Moreover, Khichdi is also served to the people who come looking for a lighter meal and even item based on Mango is served during summer.

As for desserts, Malpua, Basundi and Shrikhand are available as a choice. These precious items are a must-have for the visitors looking to enjoy a meal which gives them delights of even Gujrati meal. Also, Fafda, Farsan and Dhokhla are available in various sweet and dairy stores located all over this city.

The people belonging to Rajkot are known to have a very polite and cheerful nature. Therefore, the celebrations of several famous festivals are filled with excitement and joy.

Janmashtami in Rajkot is celebrated for the entire seven days while the Ganesh Puja celebration lasts for ten days. Moreover, both Christmas and Diwali are also celebrated for a whole week. 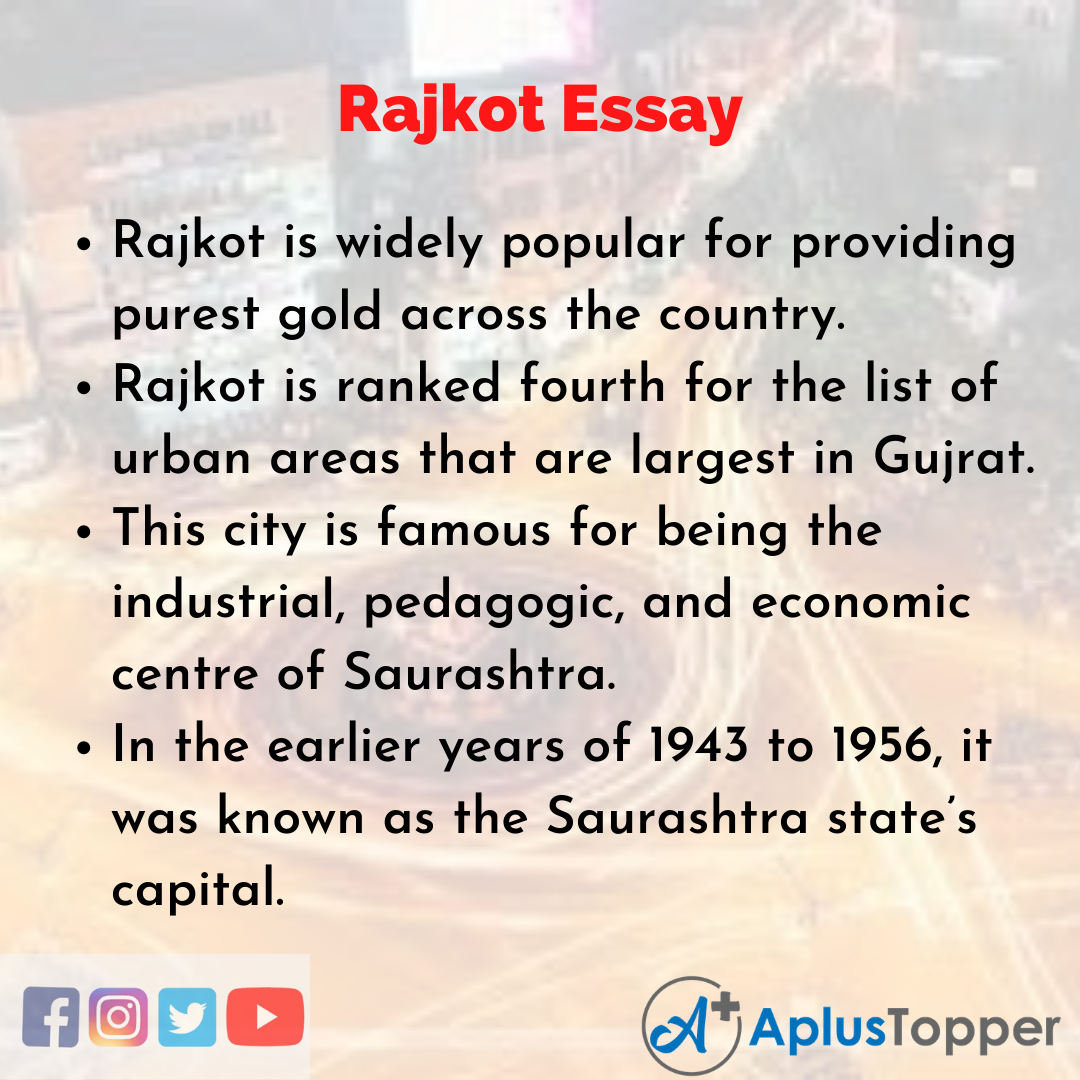 Rajkot is considered to be one of the fastest developing urban areas in the country. This city is situated on the river banks of Aji and Nyari. This city is also included in the top ten list of the cleanest Indian towns. Rajkot is referred to as the administrative head office of the district of Rajkot.

This city is situated at the centre of the Saurashtra comprising of dry temperature and tropical weight. The temperature of this place is considered to be pleasant in November and February. Although, the summer season in Rajkot is scorching and ranges up to 45 degree Celsius.

This city is widely known as a multilingual town. The primary languages that are used by the people in Rajkot are English, Malayalam, Sindhi, Gujarati, Urdu, Hindi, etc. However, there are some popular languages amongst these, including Gujarati, Hindi, Urdu, and English. Rajkot is famous for the availability of fresh and tasty food items.

10 Lines on Rajkot Essay in English

1. This city is known to possess its genre of local music known as “Dayro”.
2. Rajkot is widely popular for providing purest gold across the country.
3. Rajkot is ranked fourth for the list of urban areas that are largest in Gujrat.
4. This city is famous for being the industrial, pedagogic, and economic centre of Saurashtra.
5. In the earlier years of 1943 to 1956, it was known as the Saurashtra state’s capital.
6. The literacy rate of this city is considered to be higher than 82.20% of the entire national average.
7. Rajkot is also considered to be one of the cleanest and greenest cities in India and ranks 6th in the list of cleanest Indian towns.
8. There are several types of languages that are used in Rajkot, including English, Urdu, Sindhi, Tamil, Hindi, Malayalam, Marathi, etc.
9. This city is widely referred to as “Colorful Rajkot”.
10. The most famous “Rotary Dolls Museum” is situated in Rajkot. 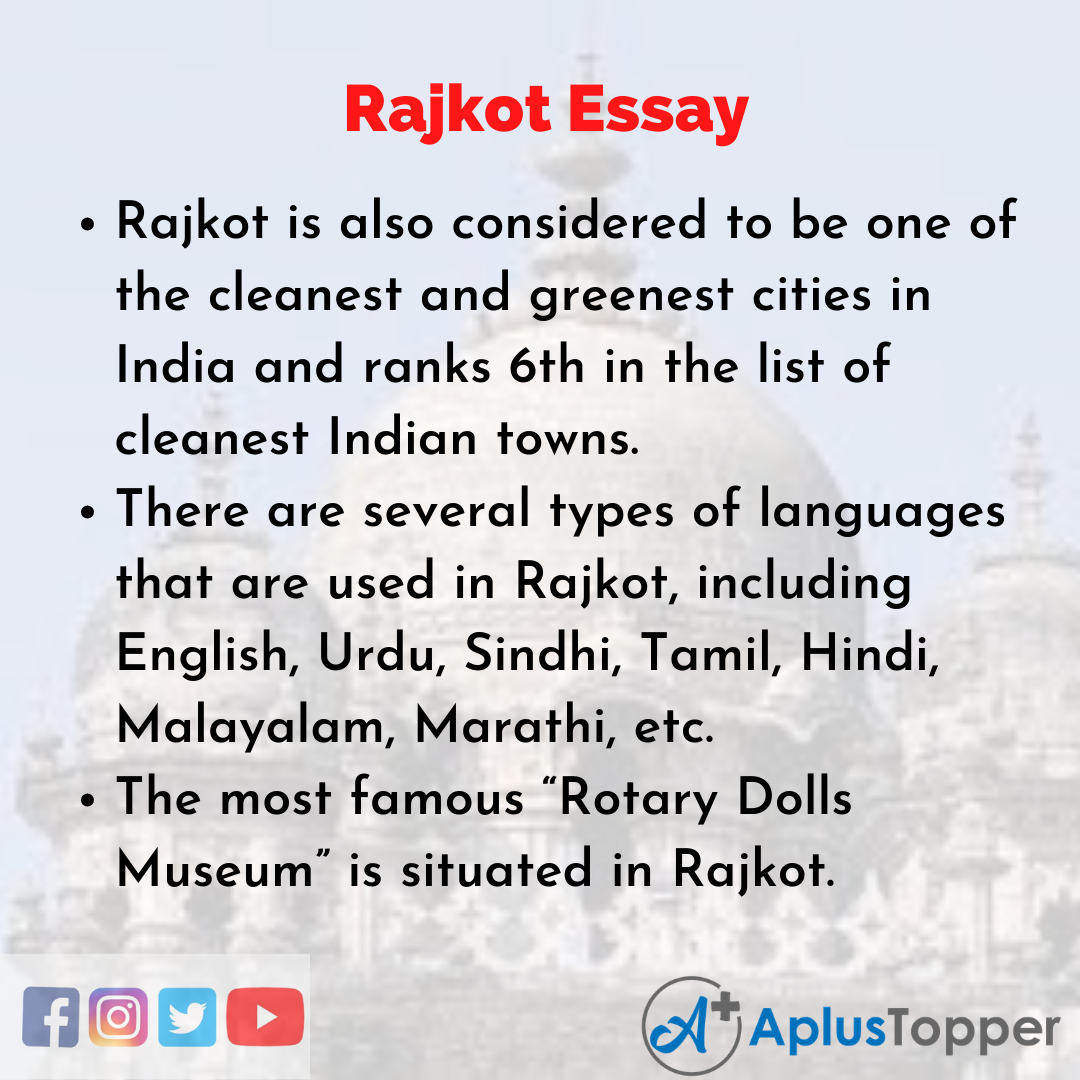 Question 1.
Which months are best for visiting Rajkot?

Answer:
It is best to visit Rajkot between November and March.

Question 2.
What are the famous dishes available in Rajkot?

Answer:
The famous foods available in this city are Undhiyu, Khichdi, Rotolo, Handva, Thepla, and so on.

Question 3.
What are the most famous tourist destinations in Rajkot?

Question 4.
Why is the city of Rajkot famous?

Answer:
This city is famous mostly for its silk work, parts of the watch, and gold jewellery.