Essay on Nashik: This is considered a city containing a high number of people belonging to a Hindu background. The Kumbh Mela is generally hosted by the town of Nashik every twelve years. Nashik is also famous for the presence of a variety of wine. The name Nashik has been to it after a relic related to the Ramayana.

Nasik is a city located in the state of Maharashtra. This city houses several magnificent temples, monuments, and museums. This place is also mentioned in Hindu mythology, i.e., Ramayana. This city is known to have religious importance as well. The most famous temples of Nashik are Trimbakeshwar and Shirdi.

We provide students with essay samples on a long essay of 500 words and a short essay of 150 words on the topic Nashik for reference.

The state of Maharashtra is considered to be the largest state in India. Nashik is a city present under this state. This city consists of fascinating monuments that never fail to appeal to the tourists.

This city is the centre of religious monuments and temples. This city is considered to be peaceful and beautiful. This city is located on the banks of the river Godavari.

Nashik is considered to be a famous town, which is also mentioned in the epic Ramayana. This city has a mythological background for which it is known across the entire country. Besides, the organization of the most renowned Kumbh Mela also takes place here. Other cities are also involved, such as Ujjain, Haridwar, and Allahabad.

The name Nashik has supposedly been derived from cutting the nose of Supranakha, i.e., ‘Nasika’ by the younger brother of Lord Rama, namely Lakshman.

There is a place situated in Nashik that comprises five Banyan trees. This place was known to have been the home of Lord Rama for the entire 14 years of exile. The caves were the house of Lady Sita before her abduction by Ravana, the demon king.

The reason for the high number of visits by the pilgrims is the famous Kumbh Mela. It is known that the Godavari river has received a few drops of nectar of immortality.

The British and the Peshwas are linked with the geo-historical background of the city. They ruled the city until India achieved its freedom from them.

The population of this city is known to be around 31,86,973 people. This city is situated at an altitude of 560 mt. The area taken up by the town is approximately 360 sq. km. The language which is utilized the most in the city is Marathi.

There are several exquisite temples present in Nashik, including the Kalaram Temple. This temple is devoted to Lord Rama. The temple was established by Sardar Odhekar back in the 18th century.

The Kalaram Temple is widely famous for its beauty since it is adorned with a copper dome plated with gold. The sculptured idols are known to be very magnificent.

Every festival related to Lord Rama and the events displayed in the epic Hindu mythology Ramayana took place in this location.

The Sita Guffa, where the abduction of Lady Sita took place by the demon king, Ravana, is situated near the western part of the door. The mythical five banyan trees are also located in this particular premise.

Good luck is usually symbolized by running water since ancient times. It is considered to be the truth for this city since the river Ganga is present in this place. Its Ghat is filled initially with several temples that are devoted to different deities Hindu.

Several festivals like ShravaniSomvar and MahaShivratri are celebrated with enthusiasm and excitement here. Nashik is considered an ancient city situated in the north part of the state of Maharashtra. This city is a famous site for Hindi Pilgrimages. Here, Kumbh Mela is held for 12 years.

This city is ranked 3rd in the list of biggest cities situated in Maharashtra. This city is near Mumbai’s capital and is also known as the “Wine Capital of India” because nearly 50% of India’s wineries and vineyards are found in this city.

Nashik is also well-known for its surroundings and cold climate throughout the year. Tourists worldwide come to visit places in Nashik, such as Dudhasagar Waterfalls, Trimbakeshwar, NandurMadameshwar Bird Sanctuary, Shirdi, BhandardaraJawhar and Saptashringi Devi Temple.

This city is also famous for its production of vegetables and fruits. Onions, Grapes, and strawberries are exported from this city and are of the highest quality throughout India.

10 Lines on Nashik Essay in English

1. Nashik is home to the Maharashtra Police Academy, a renowned institution that finished its 100yrs in 2007.
2. The largest Aritellery Centre of Asia is situated in this city. It acts as a crucial training centre that helps to train soldiers.
3. This city is also famous for having Hindustan Aeronautics Limited of Aircraft Division Nashik.
4. Grapes and onions of Nashik are exported all over India and are famous for having the best quality.
5. Nashik is referred to as the wine capital of the city.
6. This city is widely known as the city of temples comprising of several well-known temples.
7. The ancient Indian structure paperwork known as the Pandu Lenis is situated in Nashik.
8. Nashik holds 16th place for the list of urban areas with the fastest growth rate.
9. The currency notes are also printed using the currency note press present in this city.
10. Nashik is also well-known for its variation of jewellery and has several jewellery shops. 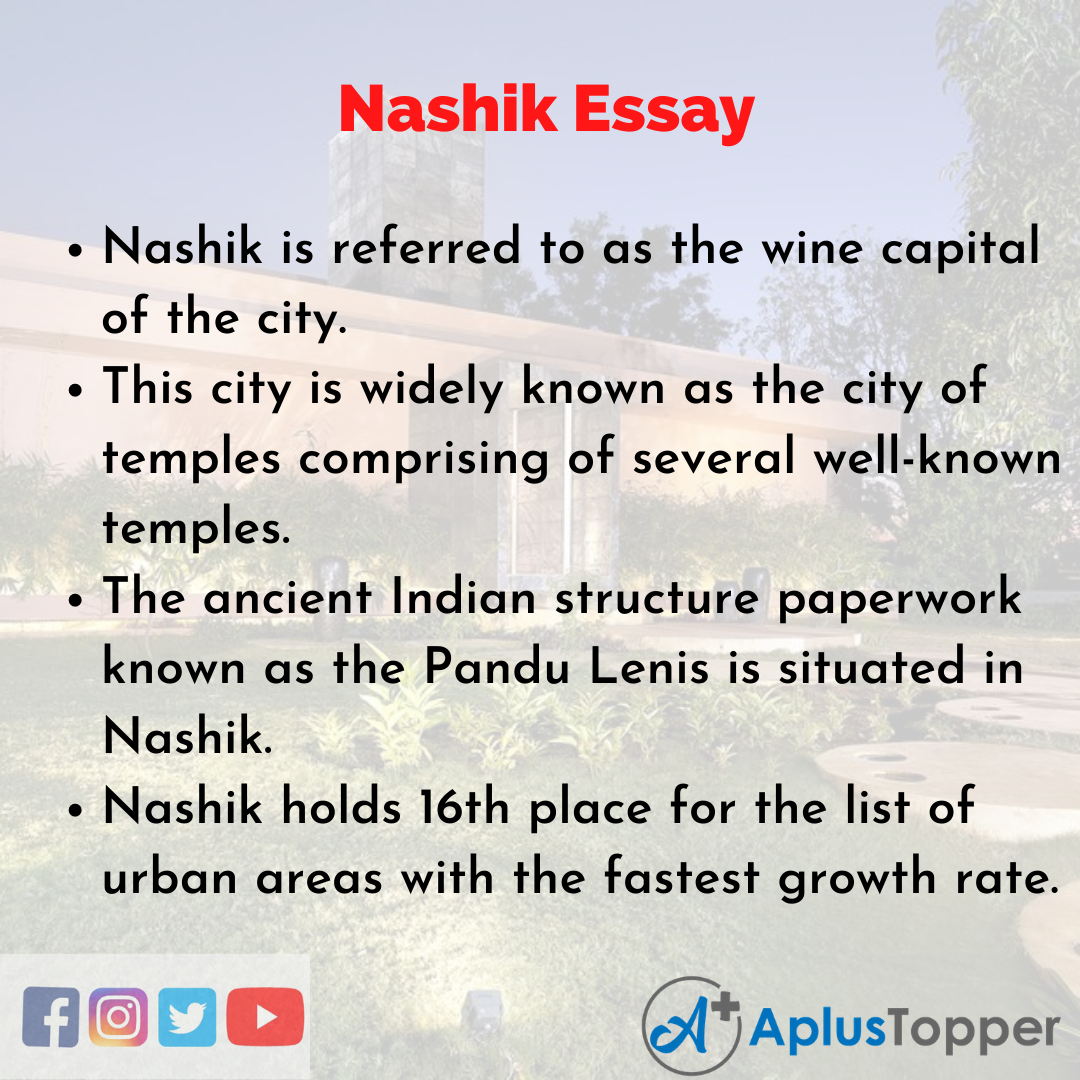 Question 1.
Why is Nashik popular throughout the country?

Answer:
It is widely known for its beautiful historical and religious places. It is an important commercial centre in the state.

Question 2.
What time is ideal for visiting Nashik?

Answer:
It is known to be ideal to visit Nashik between October and February.

Question 3.
Which places in Nashik are famous?

Question 4.
What is the food popular in Nashik?