Essay on Meerut: Meerut is situated closer to the capital of India, i.e. New Delhi. This city is developing each day drastically. Meerut is famous for housing several important industries, along with shopping centres. This place is also considered as one of the manufacturing hubs of the state.

Meerut is the home for several industries like jewellery, power looms, printing press, musical instruments, and so on. This city also comprises of several prestigious institutes, universities, and colleges. It ensures that the students receive proper and accurate education as per their career choice. Besides, Meerut is also considered to be included in the NCR ration.

We are providing students with essay samples on a long essay of 500 words and a short essay of 150 words on the topic Meerut for reference.

One of the ancient cities in the country is Meerut which existed back in the Indus Valley Civilization. The closeness of the town to New Delhi has turned it into an important place over the years.

In the archaeological part of the city, the Alamgirpur diggings are considered to be the most popular. Since this area comprises of all the artworks dated back to the Harappan civilisation. Besides, the artefacts from the Mauryan period like the trinkets and pots are also extracted.

Moreover, the city of Meerut is also famous for being included in the epic Mahabharata. Therefore, this is known for being a well-known religious site across the country. Besides, this city has been started by the father of Mandodari.

Meerut is also famously called the “sports capital” of the country. This city is ideal for people interested in sports. It enables people to gather their own set of tennis balls or cricket bats. This city is also known to have been very crucial during the war of freedom.

There is a road named Surajkund Road, which is well-known among the visitors for metal-embellished jars, boxes and vases. These are used as souvenirs from various tourists as it reminds them of this city’s culture.

This city is also famous for selling sports good all over the country. Thus, it’s considered the most renowned supplier among the people of India. Various talented artists create accessories for sports in this city.

Therefore, this city is a treat for sports lovers. The artistic nature of these items is proof that the quality is top-notch when it related to accessories for sports. Meerut is also well-known for the production of instruments related to music with top-notch quality that is dedicated to musical artists.

The artisan’s shops situated in this city are well known to fulfil the needs of an artist who is looking to buy the best instruments from this city. An available spot for hangout is available at Ansal Plaza, where one can purchase items for various international brands. The thing that is sold the most in this plaza is silver jewellery.

This city is also famous for its unique celebration of various festivals. Here, various festivities are held in other months, such as during the month of July-August, Parshwanath is held.

Furthermore, the visitors across the city increases during famous festivals like Holi due to the fair that is arranged at the Nauchandi area. It is celebrated with excitement and zeal across the entire city.

Similarly, during the month of April-May, Annual Jain fair is held, and during October-November, Diwali festival is held. One of the well-known festivals that are celebrated splendidly in the city is Diwali.

People come from different states to see the spectacular fireworks that are held in this city. All of the shops, houses are lighted on this particular occasion, and thus, the whole town comes alive on this day.

Meerut is famously referred to as the home of the Pandavas. During the Ashoka Period, the establishment of several religious places and temples took place. Also, there are several famous Hindu and Jain temples situated in the district of Meerut. Meerut is a city that is well-known for its diverse and vast culture along with its fascinating monuments, substantial historical background, and mouth-watering cuisines. This city is situated in the state of Uttar Pradesh and lies about 70 km away from the state capital of New Delhi.

The past of this city is considered to be exciting and exciting, which is demonstrated in its culture and history. It is believed that this city has been found by the father of the Ravan’s wife or Mandodari.

This city is also referred to as the “Ravana’sSasural” in the epic Hindu mythology Ramayana since it was known as the capital of Maya.

Therefore, the religious importance of the city of Meerut is higher than that of the other cities in the state. Few of the famous places of Meerut are Hastinapur and Amarnath Mandir. The Amarnath Mandir is widely referred to as the Kalipatan Mandir.

10 Lines on Meerut Essay in English

1. Meerut is considered to be the ranked 16th as one of the most significant metropolitan towns in the country.
2. The army cantonment of Meerut is the biggest and holds the second rank across India.
3. Among the largest cities of India, Meerut has the 242nd rank in 2020.
4. Meerut is also popularly referred to as the centre of education across the entire state.
5. In Mahabharat, Meerut is known to be the capital city of Pandavas, referred to as Hastinapur.
6. Faridabad has acquired 16th place in the list of the urban area developing at a faster rate according to India’s prospects.
7. Initially, Meerut used to be known as Mayrashtra.
8. Meerut is well-known for its industries, primarily including the handlooms and scissors.
9. Meerut is included as one of the urban areas across the world, which has a faster rate of growth and holds the 63rd rank in it.
10. In the year of 1857, the first Independence Revolt began from here which is widely referred to as the First War for freedom. 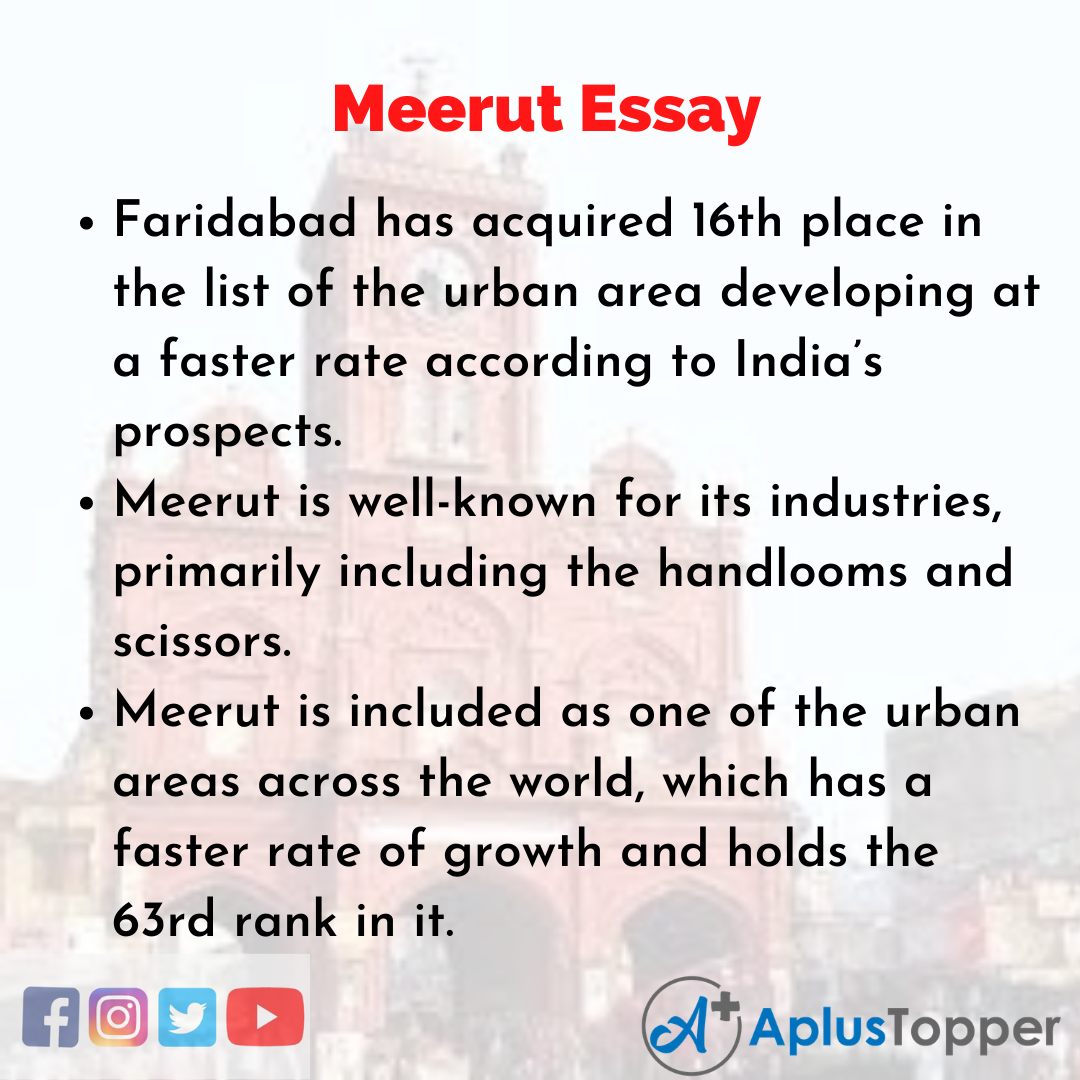 Question 1.
What are the mouth-watering food available in Meerut?

Question 2.
Which places are the best in Meerut?

Answer:
The places that are popular in Meerut include the Augarnath Temple, Mansa Devi Temple, etc.

Question 3.
When is it ideal for visiting the city of Meerut?

Answer:
Visiting Meerut from October to February is the ideal time.

Question 4.
Why is Meerut popular in the country?

Answer:
The city is well-known for being the centre of education and is also referred to as the “Sports City of India”.