Essay on Ludhiana: This city is located on the Sutlej river banks. Ludhiana is considered to be the biggest city across Punjab. It is also known as one of the major manufacturing centres in India. It is widely referred to as the Manchester of India. It is quite famous for its hosiery sectors, the war museum’s ruins, and the Lodi dynasty.

The name of the city is derived from the Lodi dynasty. Ludhiana has successfully maintained its charm from ancient times, along with spirituality. It has also adapted to the ever-changing time. This city is also known for its rich and diverse traditions in the country.

We provide students with essay samples on a long essay of 500 words and a short essay of 150 words on the topic Ludhiana for reference.

Ludhiana is widely known as an industrial city across the country. The industries in this city are widespread across the globe. It is quite famous for its Hosiery Goods, Sewing machine parts, Bicycle & Bicycle Components Companies, and machines’ tools. Thus, it also helps in improving the economy of this country.

This city is situated closer to places like Chandigarh, Amritsar, and Delhi. This city typically has an extreme climate. It includes five Seasons, such as monsoon, summer, winter, autumn, and spring. The climate of Ludhiana usually is humid in the summer season and chilling in the winter season. So, the environment of the city frequently varies depending on the seasons.

Ludhiana is quite famous for its prestigious universities, colleges, and institutes. These educational institutes usually aim to offer high-quality education to the students, including the convent and non-convent schools.

These schools have adopted all the new and advanced methods for providing the students with appropriate knowledge that can allow them to adapt to the continuously evolving world.

Although the colleges’ historical background is very vast and rich, the oldest college known to exist in Ludhiana is the government college mainly for boys. Several essential and famous personalities have received education in this college and have obtained their goals successfully.

Many other colleges have been built to offer the students the proper quality education for each stream or department. It also has numerous professional universities and colleges.

In 1894, a medical college was established in Ludhiana, which is considered to be the oldest. This is another famous institution present in this city from ancient times. It has received acknowledgement and respect across the globe. “Guru Nanak Dev Engineering College” is one of the oldest engineering university situated in Ludhiana.

Students from across the country move to Ludhiana to acquire higher career options and opportunities. Ludhiana is also highly known for the Punjab Agricultural University. It is one of the largest institutes present throughout Asia.There are a vast number of hotels, restaurants, and lounges available in the city. This city is also home to several luxurious malls. One of the famous hotels in the city is known to be the park plaza. These hotels also display the lifestyle of the people living in the city.

The large number of markets situated in new and old cities like Ghumra Mandi, Fieldganj, Gur Mandi, Chaura Bazaar, etc. These markets are filled with designer and stylish clothes, including several varieties of material. Therefore, these places are quite popular amongst the visitors, since it offers several options to select from. Besides, the quality provided here is considered to be unmatchable in comparison with some other stores.

The beauty of the city is enhanced even more with the presence of elegant places. It includes the clock tower, Lodhi Fort, Gurudwara Dukhnivaran, Guru Nanak Dev Bhavan, Maharaja Ranjitsingh war museum, etc. The centre where all the national and state-level sports or games and several concerts and open-air tournaments are held in the Guru Nanak Stadium. 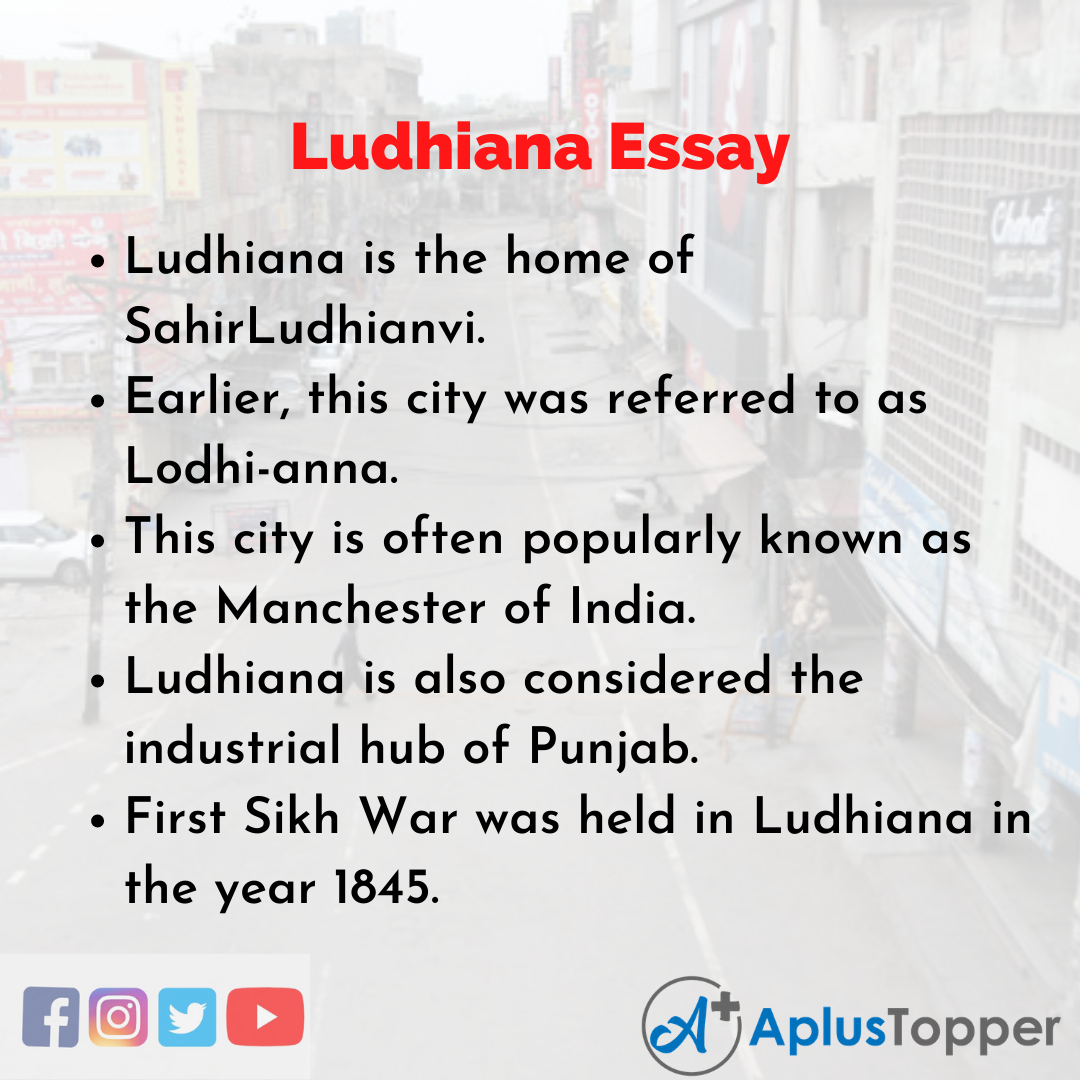 Ludhiana is a large city that is known to have a population of around 45 lacks. It is also the head office of the district of Ludhiana. This city is situated in Punjab. This city is present on the grand truck road that is linked from Delhi towards Amritsar.

This city is considered to be one of the most populated across the state. It is also growing constantly as a metropolitan city. Ludhiana is situated in the south part of the Sutlej river bank. This city has witnessed one of the most terrific wars, i.e., the first Sikh war.

Ludhiana was also considered to be a vital part of the fight for freedom. This city is related to great personalities like Sardar Kartar Singh, Lala Lajpat Rai, Maulana Habibur Rehman, Baba Santa Singh, etc. It is also known to be a significant industrial hub of the country.

10 Lines on Ludhiana Essay in English

1. Ludhiana is the home of SahirLudhianvi.
2. Earlier, this city was referred to as Lodhi-anna.
3. This city is often popularly known as the Manchester of India.
4. Ludhiana is also considered the industrial hub of Punjab.
5. First Sikh War was held in Ludhiana in the year 1845.
6. Gurudwara NanaksarJagroan is a famous Sikh-temple that hundreds of people visit every year from all over India and the world.
7. Punjab Agriculture University, which is famous throughout India, is located in Ludhiana.
8. The demand for hosiery goods of this city is high among the markets of the east and west parts of India.
9. Punjab’s most popular theme parks, i.e., “Hardly’s World,” is located in this city.
10. Maharaja Ranjit Singh War Museum is situated near the Railway Station of Ludhiana. This museum is a tribute to the brave soldiers of Punjab. 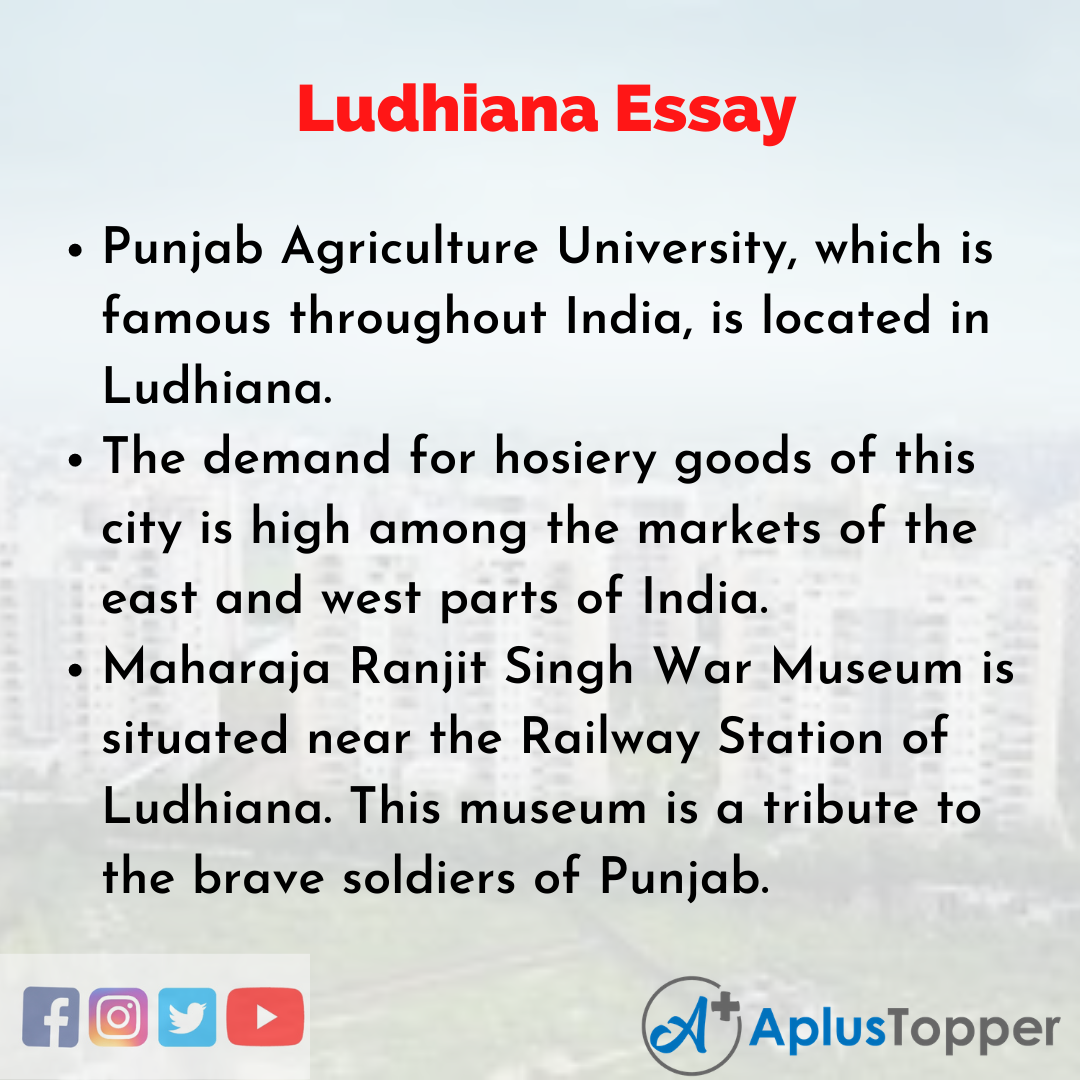 Question 1.
Which places in Ludhiana are popular?

Question 2.
When is it considered best to visit this city?

Answer:
It is best to visit Ludhiana between October to March.

Question 3.
What are the most delicious dishes available in Ludhiana?

Question 4.
Why is Ludhiana famous throughout the country?

Answer:
It is considered to be an incredible place for shopping. It also provides lots of jobs related to the commercial sector.