Essay on Kalyan-Dombivli: Kalyan-Dombivli is a twin city situated in Maharashtra. This town is thickly populated and is present in the suburb of Mumbai. The town is small and cultural with people following Hinduism.

Dombivli is a town situated in Kalyan Tehsil and is 20 kilometres from Thane and about 7 kilometres from Kalyan. This town has a high density of population of about 11 93,000. The people residing here are mostly literates.

Dombivli is the first literate town in Maharashtra and holds the second position in India with a literacy of 91%. It lies in the industrial zone and is on the eastern highway of Mumbai. Kalyan-Dombivli is the seventh-largest city in Maharashtra. In the last few decades, the twin city has witnessed a steep rise in their total population.

It covers an area of 67 kilometres square. With 122 electoral wards and eight administrative wards, it is one of the country’s progressing smart cities. Kalyan-Dombivli comes under the Mumbai Metropolitan Region, and thus it is also known as MMR.

As per the 2011 census, Kalyan-Dombivli consists of 52% of the male population and 48% female population. It is the fastest and rapidly developing node after Navi Mumbai. Out of the twin cities, Dombivli is famous for its Gudipadwa Shobha Yatra. This Shobha yatra involves people coming from a variety of religions. This yatra starts from different areas of Dombivli and ends at the Shree Ganesh Temple.

Kalyan is considered a bustling town and famous for being the exit station of Mumbai for both North and South India. Kalyan-Dombivli, the twin cities, is one of the 98 cities shortlisted by the Central Government considered to be a “smart city.” The Smart City Mission has become a bold initiative by the Government of India to drive economic growth and increase the resident’s standard of living. The twin city tends to strengthen its existing Smart City Proposal for its growth and development.

Kalyan-Dombivli has quite a strategic location and good railway connectivity. It has adequate water supply and network coverage, with the 98.5% of its population being accessible to sanitation. The Ulhas River forms the northern boundary of the twin cities. Looking at all the future perspectives of Kalyan-Dombivli, the Government has rightly chosen it to be one of the rising smart cities.

Kalyan-Dombivli has the potential of being developed into a network of public recreational areas or green spaces for the aim of rainwater harvesting. If this initiative is taken into account, it will add a boon to the development of the cities.

You can now get access to more Essay Writing on this topic and many more.

The twin cities are also advantageously positioned to leverage economic opportunities Eastern freight corridor. Out of the total area, 37% of the serviced open land is available for development in the city. It has a robust ICT and E-governance framework, which can extend the smarter interface to KDMC for the active participation of the citizens living there. The Government of India has recently announced five cities of Maharashtra state for a smart city project. Kalyan-Dombivli is one of them. It is situated in the Thane and the two cities Kalyan and Dombivli are twin cities that lie at a distance of 6 to 7 kilometres from each other.

The name of one of the twin cities, Dombivli, has been derived from the name dombs, a group of tribes that used to stay in the neighbourhood. In 1984, the Dombivli Municipal Council was merged with its neighbouring city Kalyan which formed a new governing body, the Kalyan Dombivli Municipal Corporation, or KDMC.

Due to its booming literacy rate in the country, the twin city has secured a position among 98 smart cities of the entire country. The Ulhas River runs along the length of the twin cities. Kalyan-Dombivli has the capability to run over 1000 crores projects in the last five years. It is one of the booming engines for the economic growth of the country.

10 Lines on Kalyan-Dombivli Essay in English

1. The twin cities have a low vehicular density of 145 vehicles per 100.
2. It has excellent railway connectivity with almost 10 lakh commuters daily.
3. It has eight stations within the city limit.
4. Kalyan-Dombivli has been successful in achieving 100% city-level reforms under JNNURM.
5. Kalyan-Dombivli has 55% of its population employed outside the city.
6. It lacks super-speciality hospitals.
7. It is one of the pioneers of e-governance models in Maharashtra.
8. It has 80 cost recoveries for water supply operations.
9. It lacks proper sewage systems with 18.4 km of open drains.
10. It has 27 newly added villages as a growth node by MMRDA. 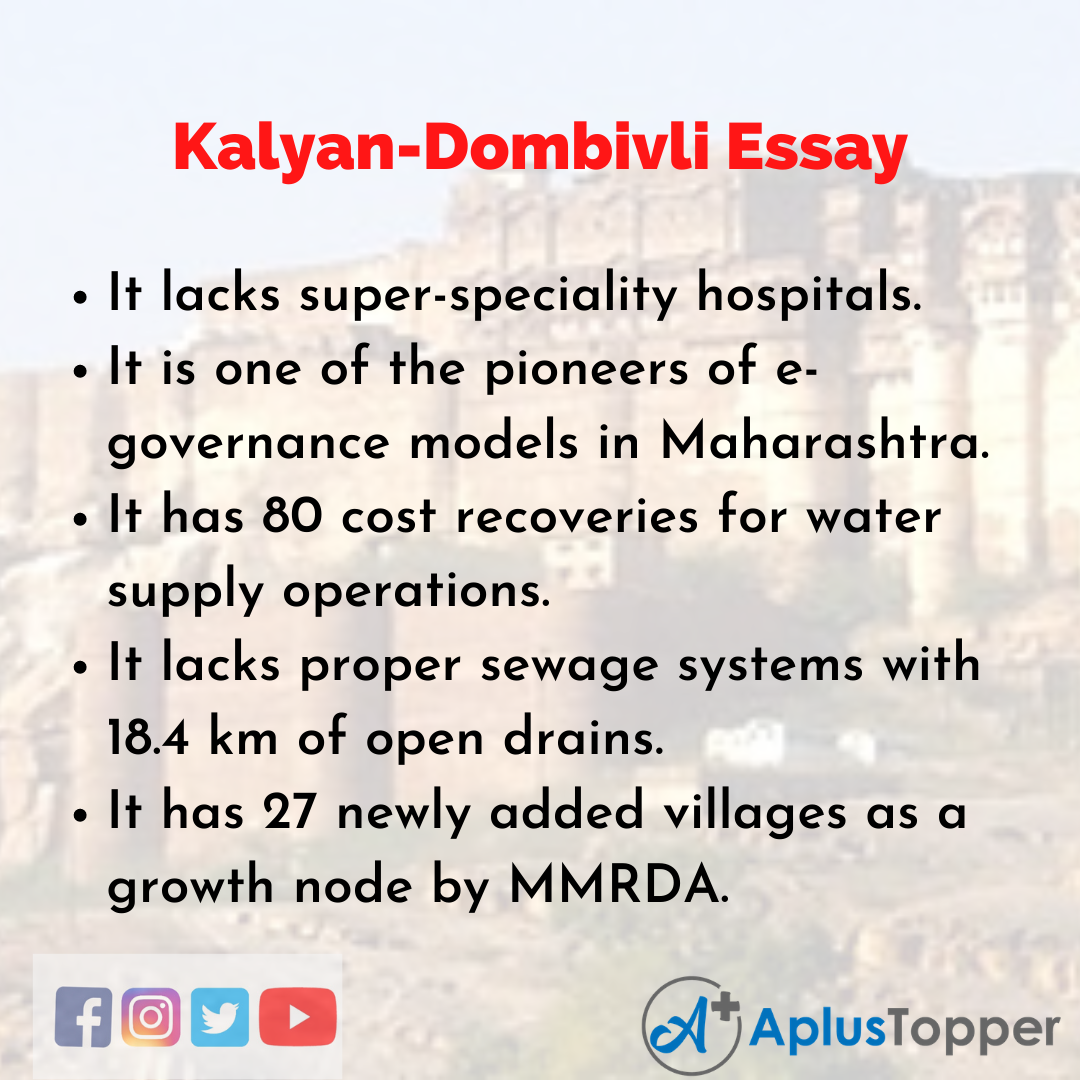 Question 1.
What are the attractions of Kalyan?

Answer:
The top attractions of Kalyan are Kala Talao Lake, Malanggad, Durgadi Fort, and Zingeria. These places are the top tourist spots in the city.

Question 2.
Is Kalyan a part of Mumbai?

Question 3.
Is Dombivli a village?

Answer:
Dombivli, a town in Kalyan tahsil, is located 20 kilometres away from Thane. Dombivli village existed 800 years ago.

Question 4.
What are the languages that are spoken in Kalyan-Dombivli?

Answer:
The most common language spoken is Marathi, along with Hindi, English, and Gujarati.