Essay on Aurangabad: The growing city and the fourth most popular urban area of Maharashtra, known with the name of “The city of Gates”. There are 52 gates in the city and have historical stories behind every gate build. Aurangabad is the largest city in the Marathwada region of Maharashtra and the famous tourist hub. The Bibi Ka Maqbara is the main attraction, which is renowned because of the resemblance with the “The Taj Mahal” of Agra.

We are providing students with essay samples on a long essay of 500 words and a short essay of 150 words on the topic Aurangabad for reference.

The name of the city Aurangabad means “Built by the Throne”. This historical city consequent its name from one of the bold and daring rulers Aurangzeb. A historic and fascinating city of Maharashtra state is known with the title of “The city of Gates”. Also, counted in one of the fastest-growing city in the world.

The city is known for the historical monuments like Bibi ka Maqbara, the Ajanta Caves and Ellora Caves, Jyotirlinga Grishneshwar temple and valley of Sufi Saints shows the cultural diversity along with the unity of the city. The 52 gates in the town tell the stories of the Mughal Empire and local culture. The fantastic historical place and perfect time can be spent here, for those who love to visit the historic shrines.

This city is not a kind of weekend spend place; you need at least 4-5 days to visit the great city. The best time to visit Aurangabad is between October and March, those who enjoy the rains, can stay in the rainy season and admire the green beauty of the place.

The city has the population approx. Fifteen lacs 58 thousand of people, with the majority of Hindus, followed by Muslims and then very few of Buddhist, Jains, Sikhism and Christianity also the part of the city. Muslims and Mughals inspire the culture and flavour of Aurangabad. There is a cultural similarity with Hyderabad. The charm, language, Cuisine and food show the mixed essence of Hyderabad, Muslim and Mughal ethos. The Biryani is known with the name of Tehri is one of the most popular food items in the city, for veg and non-veg eaters both. Another famous dish is Naan Qalia, one kind of naan prepared in tandoor with the ‘qalia’ is a spicy mixture of mutton.

Aurangabad is not the historical place; it is growing like a metro city. There are theatres, pubs, discos, shopping malls and cinema halls which are the happening places visited by local youth for the partying and dating.

One of the best places to visit in Aurangabad is Aurangabad caves, located on the hilltop. The caves are twelve rock-cut Buddhist memorials, which are devoted deeply to Buddhist form of architecture. There are ten caves to explore divided into the western and Eastern location. Another place is Daulatabad Fort, the most impressive and Solid fort in Maharashtra, counted in “Seven wonders of Maharashtra”.

The top attractive place in Aurangabad is Bibi Ka Maqbara a must-visit place, has close resemblance with Taj Mahal (among the Seven Wonders of the World). Grishneshwar Temple, the famous temple of Lord Shiva. The 12th Jyotirlinga temple is visited by countless devotees every year to seek the blessing and to see the holy water springs. The Ajanta and Ellora caves are top searched place in Aurangabad.

This UNESCO World Heritage Site, with 30 original Buddhist caves. They showcase the real art-work and the significant statues for the period from 200 BC to 650 AD. The Ellora caves are starts of a religious foundation, which is also known as ‘viharas’, and are divided into different levels. Then after, the multi-level structures are further divided into small quarters meant for sleeping, kitchen, and several other purposes. 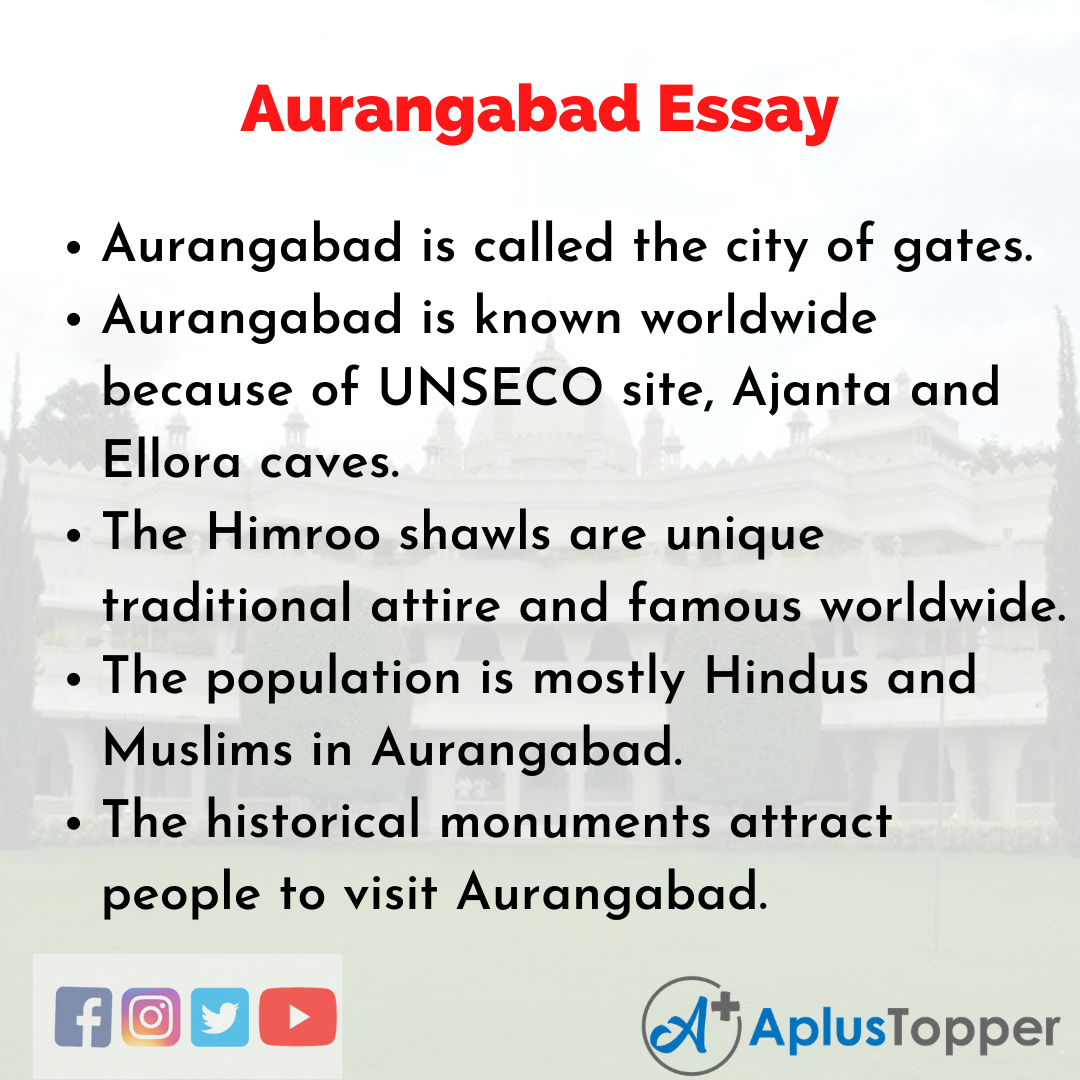 The tourist hub of Maharashtra, Aurangabad was in the name of King Aurangzeb in the 16th century. A world-famous UNSECO site is an important part and world-famous tourist destination. The historic monuments show the rich and Mughal culture of the past kings. The delight and rich culture show in the behaviour of people living there. The people are soft and polite while talking; the tehzeeb is in the blood of the culture.

Aurangabad is place liked by shopping lovers also, the Himroo shawls, Paithani sarees or fabric like Mashru and Kimkhab are a unique and diverse style of the culture. Naan Khaliya, green leaf, Biryani, mutton, & Mughlai food are the most liked and yummy foods of the city. A must-go place and enjoyed by food lovers and non-veg eaters.

10 Lines on Aurangabad Essay in English

1. Aurangabad is called the city of gates.
2. Aurangabad is known worldwide because of UNSECO site, Ajanta and Ellora caves.
3. The Himroo shawls are unique traditional attire and famous worldwide.
4. The population is mostly Hindus and Muslims in Aurangabad.
5. Grishneshwar Temple, the famous temple of Lord Shiva. The 12th Jyotirlinga temple is in Aurangabad.
6. The historical monuments attract people to visit Aurangabad.
7. Aurangabad is safe to visit and spend time with family and admire the Mughal architecture.
8. Marathi and Urdu are the languages used in Aurangabad.
9. The most visited place in Aurangabad is Bibi ka Maqbara which looks same as Taj Mahal.
10. The food and Cuisine are inspired by Hyderabad food and style. 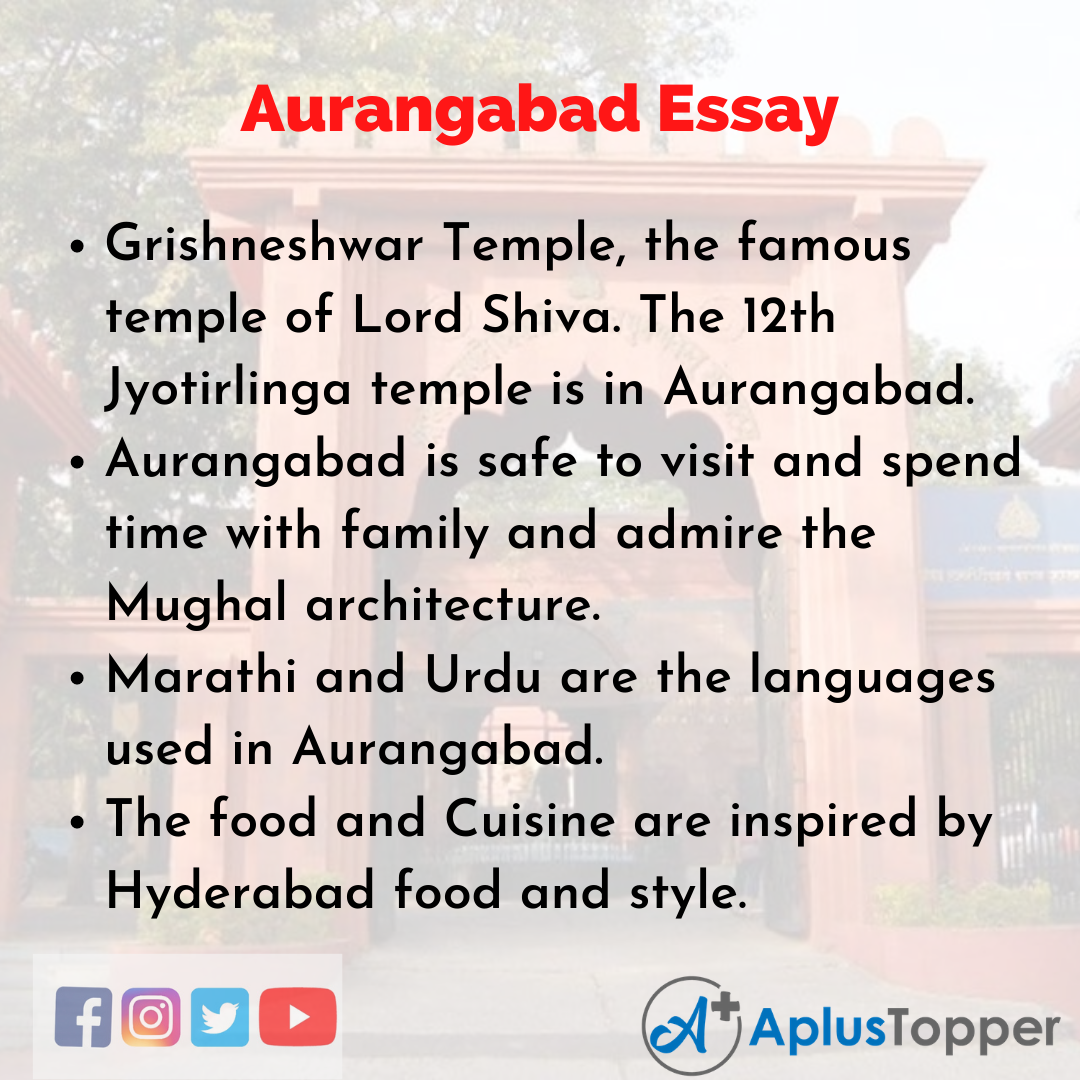 Question 1.
How safe is visiting Aurangabad?

Answer:
It is very safe to visit Aurangabad. You can see the place by taking a flight or by road travel as well.

Question 2.
Is it easy to reach to Ajanta and Ellora caves?

Answer:
Yes, it is easy. You can hire a taxi/ cab from the hotel to visit. Hotels provide city tours as well.

Question 3.
Can we book a Hotel in Aurangabad?

Answer:
Yes, of course. There are numerous luxury hotels available in Aurangabad with exciting and reasonable offers.

Question 4.
which mobile network is available in Aurangabad?